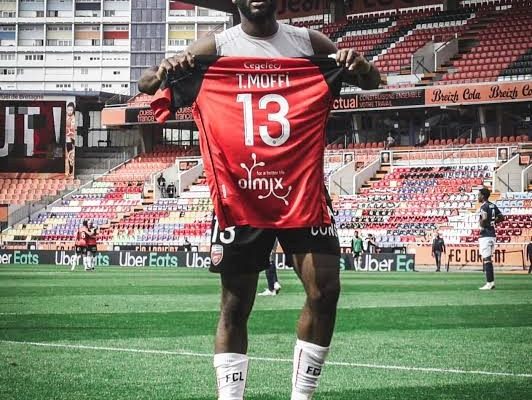 Red-hot Terem Moffi has reacted to reports linking him with a move away from France following his scintillating goalscoring form in Ligue 1.

Moffi is reportedly on the radar of German side Borussia Dortmund. The Bundesliga giants are in the market for an expert goalscorer as a possible replacement for their in-demand striker Erling Haaland.

A transfer to one of Europe’s biggest clubs, notably Manchester City, is being mooted for the Norwegian finisher, and Dortmund are looking at bringing in Moffi in his stead.

Just 21, Moffi has taken the French top-flight by storm, netting 14 goals for lowly FC Lorient in just his debut season in France.

Six of the Nigerian’s goals have come in his last three games as he continues to power struggling Les Merlus away from relegation troubles.

The former Kortrijk ace smashed home his first hat-trick of the campaign in Lorient’s 4-1 triumph over Girondins Bordeaux to send Christophe Pelissier’s men four points clear of the drop zone.

His excellent performances have only raised his profile the more, and it is unlikely he remains at Lorient should the 17th-placed side suffer demotion to the lower league.

But Moffi insists he is enjoying his time at the club and is completely focused on helping them maintain their top-flight status.

Despite the lure of playing for some of Europe’s best clubs regularly featuring in the UEFA Champions League, Moffi says he would love to be at Lorient next term.

“The road to survival is still long,” the Super Eagles hopeful told Le Télégramme, as per Walfoot.

“We have four games left. That’s what we have to focus on. But I want to stay. I love my partners. We have a great relationship.”

Lorient will remain in Ligue 1 if they can win two of their remaining four league matches, starting with a home game against Angers this weekend.