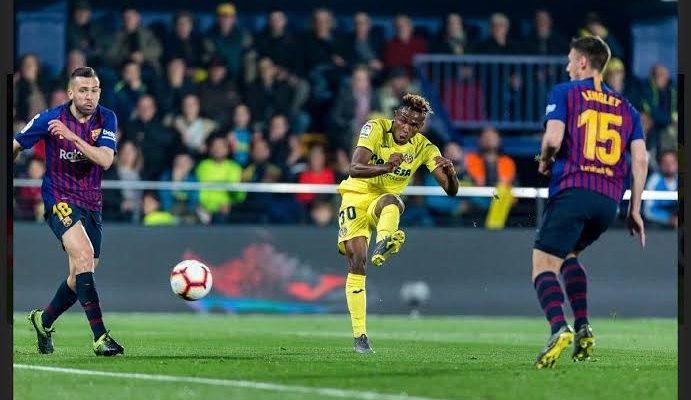 The flying winger plays under Gernot Rohr for the Nigerian national team, but it is his club boss who has impressed him with his coaching expertise

Super Eagles winger Samuel Chukwueze has hailed Villarreal manager Unai Emery as a tactical mastermind pushing him to be the best player he can be.

Emery and Chukwueze started working together after the Spaniard was sacked as Arsenal boss, and he was subsequently appointed to steer the tactical affairs of the Yellow Submarines.

And after a slow start under Emery, Chukwueze is nearing his best form for Villarreal and has been a regular in the side’s starting eleven for both continental and league engagements.

The 21-year-old has contributed four goals in his last four matches for Villarreal, including a stunning solo effort in the 2-1 defeat to Barcelona a few days ago.

Already a full Nigerian international and one of Gernot Rohr’s first-choice forwards, Chukwueze is in no doubt that his club boss towers above many others in the way he gets his job done.

The former Golden Eaglets hero told Livescore via Tribal Football: “I enjoy playing under Unai Emery. He’s amazing and so tactical in everything he does.

“He can push you to the limit, but he is a fantastic coach.

“He has an amazing football brain. He has amazed me how I have seen him change things from game to game.

“Sometimes when I watch him from the bench, I have looked at him and noticed changes he makes which work for him that are great to see. He is so good at his job and is a fantastic coach.”

Emery-tutored Villarreal have enjoyed a fantastic season with the Yellow Submarines challenging for a top-five spot in La Liga while doing well in Europe.

Chukwueze and co have a chance to make a fantastic campaign even better when they take on Arsenal for a chance to qualify for the Europa League final.