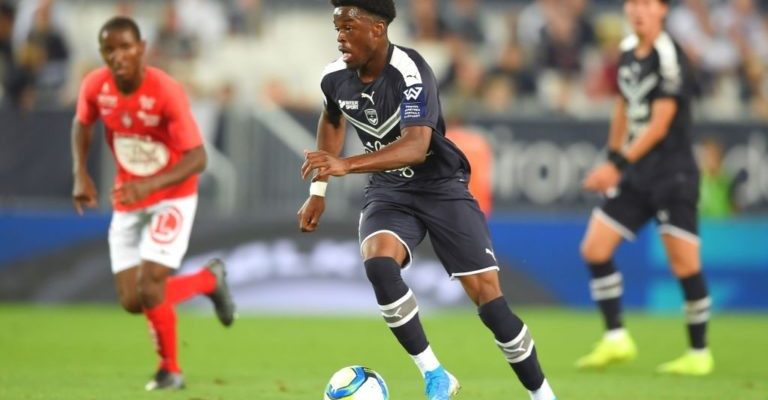 Terem Moffi’s hat-trick for Lorient in their 4-1 win over Bordeaux last weekend made the headlines in the French Ligue 1.

The 21-year-old has been a revelation in his first season in the French top-flight, and he’s one of the league’s top scorers.

Only four players have scored more goals than Moffi in the Ligue 1 this season. The Nigerian youngster has 14 goals in 28 games, which is already more than the 13 Victor Osimhen scored for Lille last season.

The former KV Kortrijk is also just two goals away from equalling Victor Ikpeba’s record as the Nigerian to have scored the most goals in a single season in the Ligue 1.

But Moffi is not the first Nigerian to score a hat-trick in the French top-flight. And as a result, Soccernet takes a look at Nigerian players who have scored three times in a Ligue 1 game.

He made five appearances for Marseille in the 96/97 season before his time at Nice in the 04/05 campaign.

Agali scored just six goals during his two seasons in France, and three of the goals came in Nice 4-3 win at Monaco in 2004.

Javier Saviola and Emmanuel Adebayor had given Monaco a three-goal lead inside the opening hour. However, Nice staged a remarkable comeback courtesy of a hat-trick from Agali and Marama Vahirua’s winner.

It was indeed a day Agali made history as he became the first Nigerian to score a hat-trick in a Ligue 1 game.

CHECK IT OUT:  EVIL! Grandma Arrested After Bathing Her Grandchildren With Pepper And Chaining Them (Photo)

John Utaka(Rennes) vs Lens and Lyon: Utaka played for Lens, Rennes and Montpellier during his time in the Ligue 1.

His best spell was with Montpellier, where he scored a brace in the 2-1 win at Auxerre that helped them to a league title.

However, before his time with La Paillade, Utaka had already been a star with Rennes after scoring back to back hat-tricks against Lens and Lyon.

The former Portsmouth star scored his first hat-trick against Lens on February 18, 2006, before repeating the same trick against Lyon a week later.

Osaze Odemwingie (Lille) vs Lens: Odemwingie scored 23 times in 75 league appearances for Lille, with three of the goals coming in a 4-0 win over Lens in 2006.

Mathieu Bodmer put Lille ahead in the 13th minute before it became the Osaze show. The former Super Eagles star scored in the 32nd, 52nd and 67th-minute for his first and only hat-trick for Lille.

He would later repeat the same feat with West Brom in the Premier League.

Josh Maja (Bordeaux) vs Nimes: Before Moffi, Maja was the latest Nigerian to have scored a hat-trick in the French top-flight.

Although his performances at the club were largely underwhelming, he was brilliant against Nimes on that Tuesday night.

The on-loan Fulham star scored Bordeaux’s first three goals to put himself in this exclusive list. It remains to be seen whether he has a future at the club, but that night will forever live in his memory.

CHECK IT OUT:  I Felt Men Were Monsters While Growing Up – Ifu Ennada