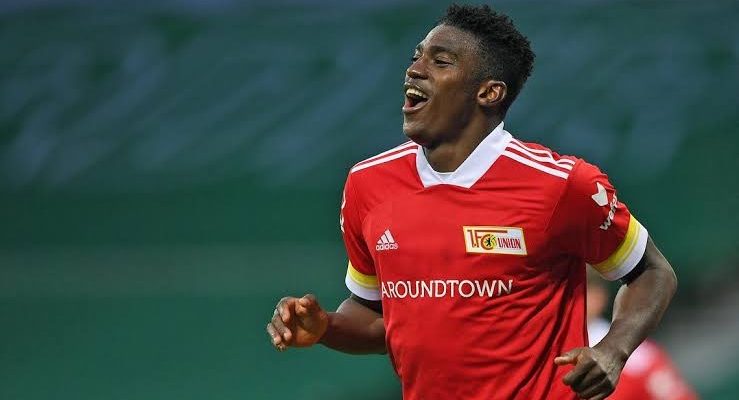 The former youth international has been inactive for club and country since mid-February, but it appears the injury wait is over

Union Berlin forward Taiwo Awoniyi has resumed training for the Bundesliga club after recovering from a thigh muscle rupture that has kept him out of action for several weeks.

It is good news for the on-loan Liverpool forward who was at the peak of his powers early in the year before he was struck down by injury.

Before his injury setback, Awoniyi was one of the most in-form forwards in the German top-flight, netting five times and contributing another two assists in 19 Bundesliga games this campaign.

Due to his excellent performances, the 23-year-old was in line for a maiden Super Eagles call-up ahead of Nigeria’s Afcon qualifiers against the Benin Republic and Lesotho in March.

But injury struck in mid-February, and the former youth international has not taken to the pitch since limping off late in Union Berlin’s 0-0 draw against Schalke.

But Awoniyi was sighted in training on Tuesday undergoing a tough running test under the supervision of fitness trainer Martin Krüger.

Saturday’s afternoon kickoff away to Vfl Wolfsburg may come too early for Awoniyi. However, with two league matches left, the former Eupen man may still get some Bundesliga action this season.

CHECK IT OUT:  Breaking!!! Sultan Of Sokoto Announces The Sighting Of The Moon