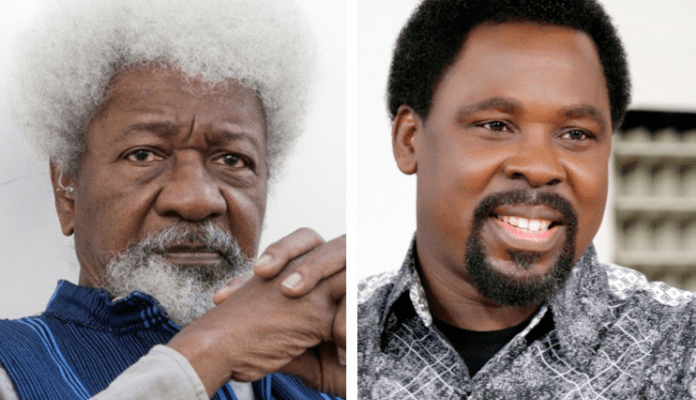 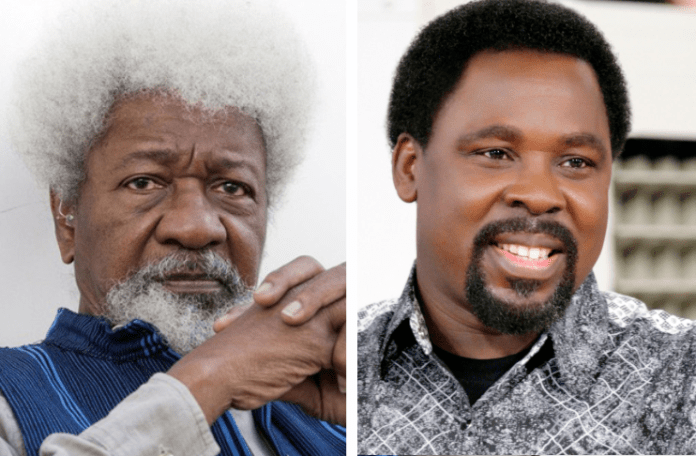 Prof. Wole Soyinka, said the founder of the Synagogue, Church of All Nations, Temitope Joshua better known as TB Joshua, ought to have been prosecuted for the collapse of his church hotel.

A coroner, Oyetade Komolafe, had in July 2015 ruled that the church was culpable.

Komolafe said Joshua’s church had not obtained proper approval before putting up the structure.

But Mr. Joshua blamed the incident on a small plane that had been circling over the building before it came crashing down and suggested it was an attempt on his life.

However, Soyinka on Saturday said T.B Joshua could only evade justice because Nigeria had become such a deeply religious society.

Soyinka said this in Abuja at the book reading and signing of two of his books titled, ‘Trumpism in Academe’ and ‘Chronicles of the Happiest People on Earth’ organised by Rovenheights Bookstore and Orisun Gallery.

The Nobel Laureate said unfortunately, TB Joshua had the temerity to say that the church was attacked by a strange aircraft.

Soyinka said, “There are others for whom the calling is just a cover-up because we have abnormal respect for the priesthood in this country. It doesn’t matter which one- Muslim, Christian, Orisa worshipper, Buddhists, whatever it is.

“Somehow, religion has almost a national character and so it doesn’t matter who it is or what he does. He can get away with a lot. Look at TB Joshua for instance whose chapel of whatever it is in Lagos, collapsed on the congregation. Not just Nigerians, close to 200 or 300. They came from South Africa and so on and so forth.

“This is somebody who should have been charged for carelessness, for flouting the laws required for setting up public establishments. The next thing he said is that oh it was an air force plane that was hovering around that cracked the walls and buried humanity. Has he been brought to trial till today?”

Soyinka, at the event, also said he doesn’t believe Nigerian unity is attainable under the leadership of President Muhammadu Buhari.

He added that Nigeria had lost a key opportunity to unite, Punch reported.

Soyinka said: “We had a critical moment and we lost that moment. The moment when this country could have come together; and the sense of oneness, belonging. That vision of oneness. We lost that moment. There has been more than one moment and we lost the moment. Will another one come? I don’t know. Right now I don’t see it under this government quite frankly.

“There is a failure, a systemic failure in present governance and I don’t know who can put it together. These days, I try to go some days without reading the newspapers. It is so depressing.”

Soyinka said he personally believed in one Nigeria but argued that it was wrong of the government to continue to say the country’s unity was non-negotiable.