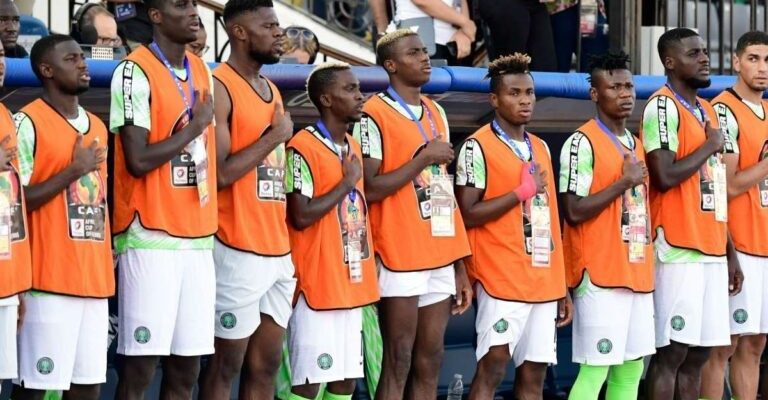 The Italian giants are in the market for a new center-forward, and how many strikers in Europe are better than the Nigerian goalscoring wonder in Genk

Serie A side Lazio are interested in signing Super Eagles striker Paul Onuachu from Genk this summer, according to ReelRadio via TuttoMercatoWeb.

Onuachu has been by some clear distance the best striker in Belgium over the current campaign, with the 26-year-old netting his 34th goal of the campaign in Wednesday’s 1-1 draw against Anderlecht.

No Nigerian striker has ever smashed in more goals in a single season in any of Europe’s ten leagues.

That incredible haul includes 32 goals in the Belgian Pro Division A and another two strikes in the FA Cup, which Genk lifted a couple of weeks ago.

The former FC Midtjylland ace also found the back of the net twice in as many games for the Super Eagles during the Africa Cup of Nations qualifiers in March.

His late winner against the Benin Republic in Porto Novo was crucial to helping the three-time African champions book their qualification ticket to Cameroon 2022 with a game to spare.

All these have seen Onuachu’s profile rise above the ceiling, with Genk expected to demand more than 30 million euros for a man they got for one-fifth that fee only two years ago.

Celtic and Lyon are known admirers of Onuachu, but the FC Ebiede product could be tempted to join one of Serie A’s most attack-minded teams in Lazio.

Compatriots Victor Osimhen and Simy Nwankwo are currently based in Italy, with the former becoming even more influential at Napoli while the latter finished among Serie A’s top scorers despite his club Crotone suffering relegation.

CHECK IT OUT:  I Can’t Boast Of Not Collecting Money From ‘Yahoo Boys’ – Jaywon