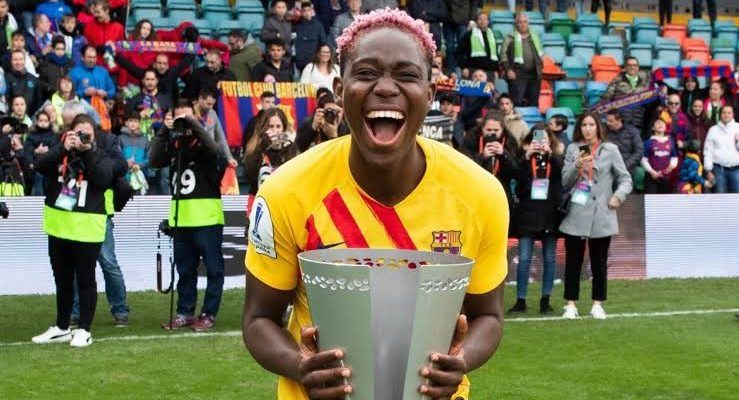 Barcelona are the 2021 UEFA Women Champions League winner after the Spanish side thrashed Chelsea Ladies 4-0 in the final played at the Gamla Ullevi Stadium in Gothenburg, Sweden.

Just recovering from an injury, Asisat Oshoala was a second-half substitute in a game where all the damage had been done in the first half.

Goals from Alexia Putellas, Aitana Bonmati, and Hansen followed Melanie Leupolz’s first-minute own goal confirmed the Spanish champions’ superiority all before the break.

The four-time African women player of the year was close to winning the UEFAWCL two years ago but failed at the last hurdle as Lyon handed Barca a 4-1 thrashing at the Groupama Arena in Budapest.

But it’s victory at last for the Super Falcons striker whose contribution to Barcelona’s triumph includes four goals in eight matches.

Oshoala scored in Barca’s 4-1 win at PSV and her side’s 5-0 victory over Fortuna Hjørring in the earlier rounds of the competition.

The former Arsenal Ladies ace then scored a goal each in both legs of her side’s quarter-final victories over Manchester City.

CHECK IT OUT:  Yemi Alade Says She Was Unable To Pay Her Staff April Salaries