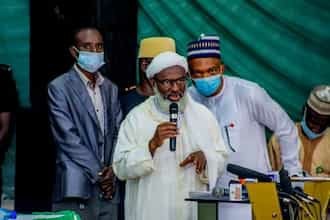 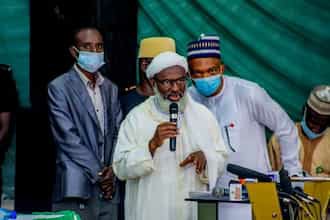 Sheikh Ahmad Gumi, a prominent Islamic cleric, has opened on how he secured the release of 37 abducted students of the College of Forestry Mechanisation in Afaka, Igabi LGA, Kaduna state.

The Punch reports that the Islamic scholar insisted that the only way to end kidnapping and other criminal activities across the country is by negotiating with bandits.

Gumi made this known while speaking at the reception he organised to meet the released college students.

According to the renowned Islamic scholar, the government at all levels have to dialogue with the bandits, adding that they were showing readiness for engagement.

He urged both the state and federal governments to engage with the bandits so that they can abandon their ways.

Gumi said though the bandits have grievances, if they come tog

ether, such issues can be addressed and the menace would be cured in a very short time.

When asked how he secured the release of the students, Gumi said one doesn’t negotiate with a friend, but with an enemy.

He was quoted by The Cable as saying:

CHECK IT OUT:  Best Chelsea Players In History