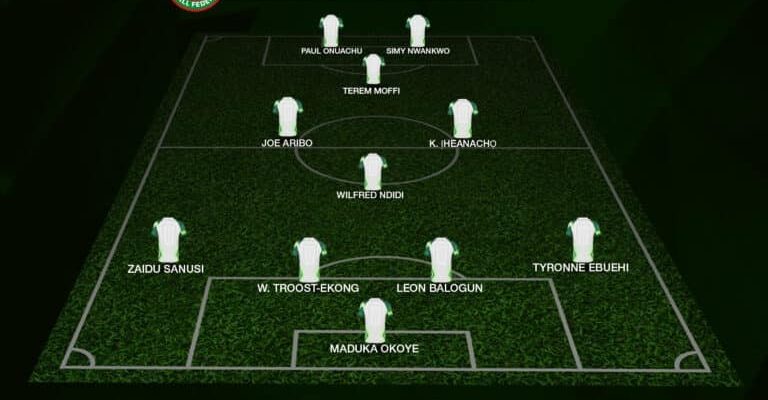 The 2020/2021 season is almost over, and what a campaign it has been for Nigerian players, especially the attackers.

Paul Onuachu has been the stand-out player this season, having scored 33 league goals for Genk in the Belgian Jupiler League- the most a Nigerian has scored in Europe’s top ten leagues.

But he’s not the only player that has set a new record this season. Simy Nwankwo has also been prolific, but more importantly, in a competitive league.

The 29-year-old is now Nigeria’s top scorer in a single season in Europe’s top five leagues with 20 league goals for Crotone in the Italian Serie.

Kelechi Iheanacho is having his personal best season in England, while Wilfred Ndidi has been brilliant for the Foxes.

Joe Aribo and Leon Balogun did not only win the league with Rangers, but they also went the whole season without losing a league match.

In France, a youngster named Terem Moffi is flying Nigeria’s flag high. The 21-year-old has scored 14 times in Ligue 1, which is more than what Osimhen managed last season and only two short of Victor Ikpeba’s 16.

Some other players have also stood out for their respective clubs, and to reward their performances, Soccernet creates a list of Super Eagles best XI for the 2020/2021 season.

Maduka Okoye (Sparta Rotterdam): The Super Eagles have been short of quality goalkeepers in recent times, but Okoye has shown he could put an end to that, and it’s not a surprise to see him take his spot in the best XI for the season.

The 21-year-old has been far better than his rivals Francis Uzoho, Daniel Akpeyi and Ikechukwu Ezenwa this season.

While others have been in and out of the starting lineups of their respective clubs, Okoye was a key figure for Sparta Rotterdam in the Dutch top-flight.

Although he started the season on the bench, he turned it around and went on to make 28 league appearances, keeping ten clean sheets, averaging 2.6 saves per game as Sparta finished in eighth place.

CHECK IT OUT:  Zlatan Ibile Excited As He Hugs Cardi B, Shares Photos

There’s still a need for improvements, but it’s still a good campaign for a guy playing his first season in the top-flight.

Tyronne Ebuehi (Twente): Another Eredivisie player takes up the right-back position. The last few years have been a difficult one for Ebuehi due to injuries.

However, he has finally managed to bounce back in the country where it all started for him. The 25-year-old joined FC Twente on loan from Benfica, and the move did him a lot of good.

He has also made a return to the national team this season. The former Ado Den Haag player has done enough to take the right-back spot ahead of Ola Aina, who suffered relegation with Fulham.

William Troost-Ekong (Watford): When Ekong moved from the Italian Serie A to the Skybet Championship, it surprised many people.

Although it’s still seen as a downgrade, the Nigerian international’s decision has been justified after helping Watford gain an immediate return to the Premier League.

Ekong joined the Hornets from Udinese to achieve his dream of playing in the Premier League, and he has been able to do that.

The Super Eagles vice-captain played 32 times in the league for Watford, starting 31 of the games. He was part of a defence that conceded just 30 goals, while he also kept 12 clean sheets.

Leon Balogun (Rangers): Balogun is another player that had some renaissance this season. The other half of the ‘oyinbo wall’ joined Rangers on a free transfer after two difficult years at Brighton.

The former Mainz star settled in quickly at the Ibrox and became an instant fan favourite. Balogun’s impact at Rangers was clear to see, helping Steven Gerrard’s side win their first league title since 2011.

Zaidu Sanusi (Porto): The left-back position is only for one player, and that’s Zaidu Sanusi. The 23-year-old has been a revelation this season.

Sanusi joined Porto from Santa Clara this season, but the Nigerian has slotted in easily, making the left-back spot his own.

CHECK IT OUT:  “Pastor Osinbajo Lies As Much As The Devil” – Reno Omokri Blasts VP

Although Porto lost the defence of their league title, Sanusi was one of the team’s best players in both the league and Champions League.

Sanusi made 25 appearances for the Dragons this season, scoring one goal. He also scored a goal in the Champions League and even made the team of the week on one occasion.

Wilfred Ndidi (Leicester City): For the second consecutive season, Wilfred Ndidi features in our team of the season.

The Nigerian international suffered a setback earlier in the season as he had to miss three months of action. But ever since he made a comeback, he hasn’t put a foot wrong.

Ndidi has been one of Leicester City’s most important players, and this season has been no different. The 24-year-old has been key to the Foxes pursuit for a top-four finish and also played a starring role in the FA Cup win over Chelsea.

Joe Aribo (Rangers): Joe Aribo also made our team of the season for the second consecutive year. Like Ndidi, Aribo also suffered an injury earlier in the season that kept him out for six weeks.

However, he came back to play an important role and help Rangers finish as unbeaten champions. Although he did not reach last season’s numbers, Aribo still scored seven goals in 31 league games for the Gers while he also scored one goal each in the League Cup and Europa League, respectively.

The Nigerian international has been a goalscoring machine in the last three months and helped Leicester to their first FA Cup title.

The ex-Manchester City man scored the winner against Southampton in the semifinal and a brace against Manchester United in the quarterfinal.

CHECK IT OUT:  “I Can’t Forgive Myself, I’m Ashamed” – Peruzzi Apologises For His 2012 Rape Tweets

He also has 11 goals in the Premier League this season.

Terem Moffi (Lorient): Although Moffi is a centre-forward, it would be hard to displace the two strikers in this team, so he stays just behind them.

The 21-year-old has been a revelation in his first season in the French Ligue 1, making it hard to leave him out of the team.

Moffi joined Lorient from Kortrijk for eight million euros and has justified every penny paid for his services- although it hasn’t really reflected in Lorient’s performances.

Les Merlus are currently embroiled in a relegation battle with one game left, but Moffi has been the shining light in the team.

The youngster has scored 14 goals in 31 league games, which is why Lorient is still with a chance of staying up.

Paul Onuachu (Genk): He may not be Gernot Rohr’s favourite player, but Paul Onuachu has been head and shoulders above other Nigerian players this season.

No Nigerian player, past or present, has scored more goals than Onuachu in a single campaign of Europe’s top ten leagues.

The Nigerian international has scored an incredible 33 goals in 37 league games for Genk this season- the most a player has scored in a single campaign of the Belgian top-flight this century.

He also has an additional two goals in the Belgian Cup, which Genk won. It has indeed been Onuachu’s season.

Simy Nwankwo (Crotone): Onuachu is not the only Nigerian making history. Simy Nwankwo has also had a record-breaking season but in a more competitive league.

The 29-year-old has not been able to save Crotone from relegation, but he is one of the most prolific goalscorers in the Italian Serie A this season.

Simy has scored 20 league goals this season- the second African to do so in the Italian Serie A after Samuel Eto’o scored 21 goals for Inter Milan in the 2010/2011 season.