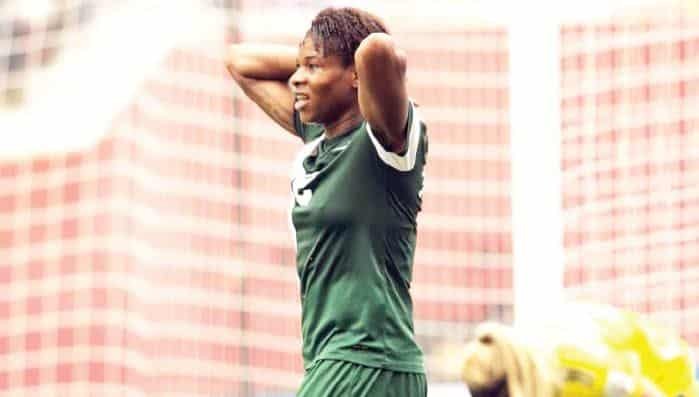 But once again, Dijon forward Desire Oparanozie has been omitted from the squad scheduled to play four-time world champions USA, Portugal, and Jamaica in June.

The 27-year-old has been in trouble with the Nigerian football authorities since leading a sit-in protest over unpaid bonuses and allowances at the 2019 World Cup in France.

As a result of which she was not invited as part of the 23-player squad for the Turkish Women’s Cup, which the nine-time African champions won in February.

Oparanozie scored three goals in four games to power Nigeria to victory at the 2018 Africa Women Cup of Nations in Ghana.

Meanwhile, the squad announced by the NFF includes reigning African footballer of the year Oshoala, who recently claimed the UEFA Women Champions League with Barcelona.

The continent’s most successful national side with nine African titles will kick off their first game of the glamour tournament against Jamaica on June 10 before squaring up against Portugal three days later. The Super Falcons’ last match will be against four-time FIFA Women World Cup winners USA on June 16.

CHECK IT OUT:  “My Wife Is A Fighter, She Curses Me Too Much” – Man Tells Court