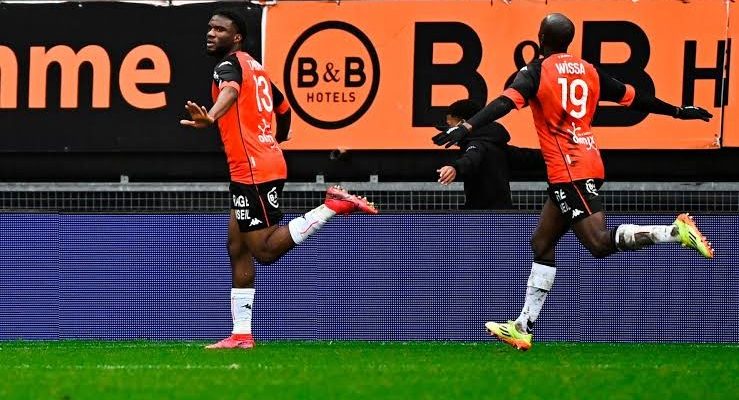 FC Lorient are aware that a few clubs are casting admiring glances at Terem Moffi, but the club has made it clear that they have no intention of selling the young forward this year.

Moffi only joined Lorient last summer when the newly-promoted side parted with €8 million to sign the then-21-year-old from Belgian side Kortrijk.

The Super Eagles invitee repaid much of that investment throughout the campaign, netting 14 goals and another three assists to almost single-handedly help Lorient avoid demotion back to Ligue 2.

The youngster’s excellent performances have not gone unnoticed, with German Cup winners Borussia Dortmund reportedly among the clubs interested in securing the services of the 22-year-old.

But Lorient President Loïc Féry has dismissed any rumours that the club is looking to sell Moffi, emphasising that Christophe Pélissier’s side will be counting on the Nigerian next term.

“I am not expecting miracles from the next Mercato. We want to keep Terem Moffi, we will count on him. Then there will be one or two departures and a few transfers. We will rely on this group.”

Moffi’s stunning season in France has already earned him a call-up to the Nigerian senior national team.

He will likely make his international debut next week when the Super Eagles trade tackles with Cameroon in a friendly encounter in Austria.

CHECK IT OUT:  “They should fight for themselves” – Seun Kuti condemns the fight for increase in salary of police officers