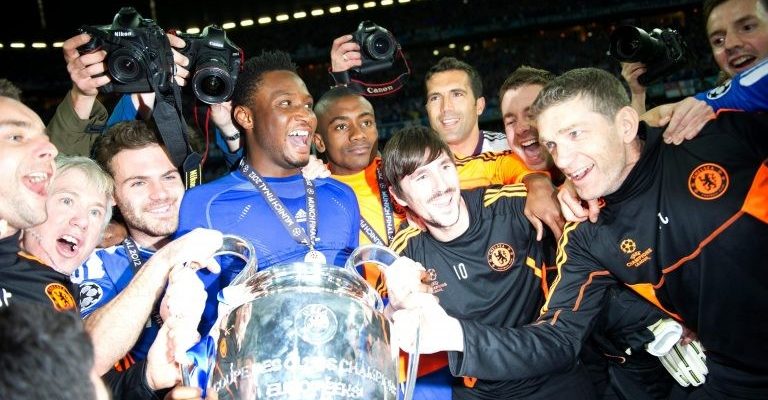 The 2021 Champions League final takes place tonight at the Estádio do Dragão, with Chelsea taking on Manchester City for the biggest prize in club football.

For City, they are the favourites but are chasing their first trophy in the competition’s history. Meanwhile, Chelsea are hoping to win their second title following their first success in 2012.

The Blues saw off the challenge of Bayern Munich via penalties to take home their first Champions League trophy.

Both sides had cancelled each other out inside 90 minutes, with Thomas Muller putting Bayern ahead before Drogba levelled the scores for Chelsea.

Neither side could find the winner in extra-time, although Arjen Robben missed a penalty for the Bundesliga giants.

A Penalty shootout was needed to separate the sides, and Chelsea came out victorious with Drogba scoring the winning penalty.

Drogba was Chelsea’s hero on that emotional night at the Allianz Arena. While the Ivorian deserved the praises, Chelsea had another unsung hero that night, and that was John Mikel Obi.

The Nigerian played the entire duration of that match and did not put a foot wrong once. Just like tonight, Chelsea were underdogs in 2012, so we take a look if the 2012 Mikel would fit into this current Blues side.

Chelsea lined up in a 4-3-2-1 formation, but under Thomas Tuchel, who is their current manager, they are likely to stick with the 3-4-3 formation.

Mikel played as the defensive midfielder on that night in Munich. The former Super Eagles captain was brilliant in breaking Bayern’s attacking play, while he was also tidy and calm in possession.

He made four successful tackles that night in Munich while also having a pass success rate of 88%. The now Stoke City star was so good that night that the Champions League social media page created a highlight reel of his performance.

CHECK IT OUT:  These photos of Khloe shows she is Really Living Her Best Life in Maldives

Although tonight’s lineup is likely to be different, 2012 Mikel would slot in easily if he was playing. Tuchel plays three at the back with four midfielders- although two of them are wingbacks.

Jorginho is likely to play the Mikel role, and there’s nothing that shows the Italian is better in the role than the ex-Nigerian international.

It’s all about breaking up City’s attacking play and also laying the foundation for Chelsea’s forward play. No one plays this role better than the Nigerian during his time at the club.

Nonetheless, this is a hypothetical scenario as Mikel’s time at Chelsea is in the past. But he will be one of the supporters cheering the team on tonight as they aim to win their second Champions League.