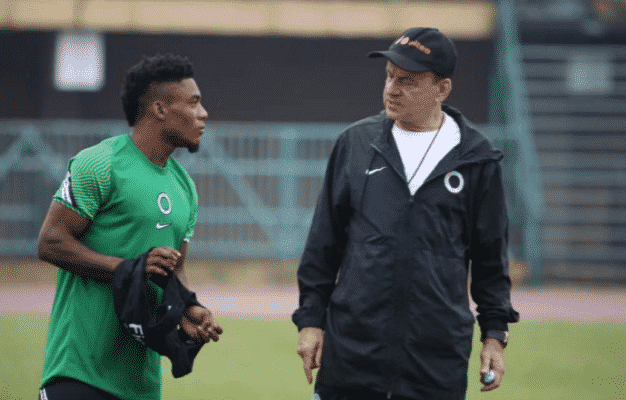 The Enyimba star won his first two caps in the Africa Cup of Nations qualifiers against Benin and Lesotho, but he only appeared as a late substitute in both games

The young forward has enjoyed a breakthrough season with the Aba Elephants, and his excellent form caught the attention of Super Eagles boss Gernot Rohr who later handed him his debut this year.

Iwuala made his debut in the team’s 1-0 victory in a 2021 Africa Cup of Nations qualifiers. He also had a cameo role in Nigeria’s 3-0 win against the Crocodile of Lesotho in the final AFCON qualifier at the Teslim Balogun Stadium, Lagos.

With the Super Eagles set to face Cameroon in Austria, Rufai, in a chat with Soccernet.ng stated that Rohr has nothing to lose if he starts Iwuala against the Indomitable Lions.

He said that the game should afford Rohr the chance to know the strengths and weakness of some of the players ahead of the 2022 FIFA World Cup qualifiers.

“This is a game I expect the Super Eagles coach Gernot Rohr to use some of the new players, and most especially Enyimba star, Anayo Iwuala,” Rufai said

“He’s one of the most exciting young talents in the Nigeria Professional Football League (NPFL) at the moment, and we have seen exactly what he can do in some of the matches he has played for the Super Eagles.”

“The friendly game is not a ‘do-or-die encounter, and I think this game will afford him the opportunity to ascertain their strengths and weaknesses before the main task in September against Liberia in a 2022 FIFA World Cup qualifier,” Rufai added.

Nigeria’s game against Cameroon takes place at the Weiner Neustadt Stadium in Austria, with kickoff set for 8:30 pm.