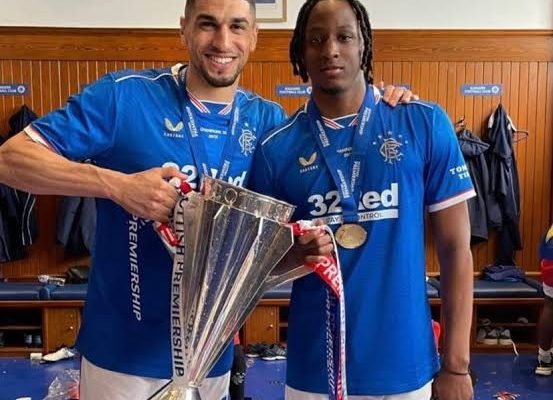 Nigerian youth international Nnamdi Ofoborh has revealed his excitement at the prospects of joining Scottish Premiership champions Rangers in the coming days ahead of the 2021/2022 season.

Ofoborh spent the second half of the last campaign at Wycombe Wanderers on loan from Bournemouth, but the midfielder signed a four-year pre-contract agreement with Rangers in February.

While the 2018 Bournemouth U-21 Player of the Year was on the treatment table nursing his way back from an injury, Rangers were romping their to their first league title in a decade.

Super Eagles stars Joe Aribo and Leon Balogun, as well as Nigeria-eligible fullback Calvin Bassey, were involved as Steven Gerrard’s men put together an incredible unbeaten run of matches to dethrone Celtics as the kings of Scotland.

The Premiership race promises to be an even exciting contest between the two Scottish rivals next term, and Ofoborh can’t wait to help the Gers outshine their eternal foes again.

“How excited am I about getting up there? On a scale of one to 10, I’m probably about a 12 right now!” Oforborh said as quoted by the Daily Record.

“I just want to get to Glasgow and get going. They are a massive club, one of the biggest out there. Everyone wants to play for the biggest clubs, and now I’m going to get that chance.

“I’m a winner, so I want to win trophies in my career.

CHECK IT OUT:  MUST READ! Maguire Reveals Why Arsenal Beat Man United 2 – 0

“I want to make the fans and my family proud by getting my hands on some silverware.

“They’ve won the title, but it will be our job to make sure we hold on to it and win again next season.”

Born in England to Nigerian parents, Ofoborh has already represented the African giants.

The 21-year-old midfielder was called up to the Flying Eagles squad for the Under-20 World Cup finals in Poland in 2019, making three appearances in the tournament.