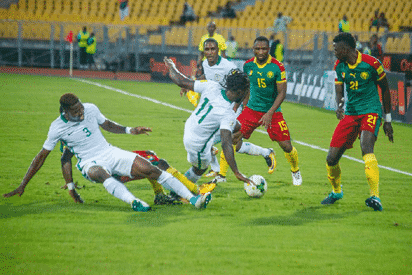 After Nigeria’s 1-0 loss against Cameroon in last week’s Friday international friendly game at the Wiener Neustädter Stadium, Super Eagles coach Gernot Rohr will be hoping the team turns it around against the same opponent today.

Soccernet.ng highlights five changes Rohr must make ahead of Tuesday’s clash against the Indomitable Lions of Cameroon.

Rohr must do better with his substitutions.

He was indecisive in his substitution against Cameroon. Win or lose, the key thing is to see all the players given a chance.

It was also obvious that the European season has gotten better of some of the players, but Rohr ended up fielding them for 90 minutes.

Bringing them in when Nigeria was already losing 1-0 didn’t help the boys’ confidence. Rohr needs to give them enough time to express themselves against the Indomitable Lions of Cameroon today.

The Super Eagles defence is built around the partnership of Leon Balogun and William Troost-Ekong.

However, their absence in tomorrow’s friendly game against Cameroon may likely expose Nigeria’s defence if team coach Gernot Rohr fails to fix the vacuum.

It is not known yet if Awaziem will be able to shoulder the responsibility of filling Troost-Ekong’s shoes, but the Boavista defender will be hoping to make a statement of intent on Tuesday in the absence of the team’s vice-captain.

Better Cohesion In The Midfield

The Super Eagles midfield against the Indomitable Lions of Cameroon failed to sparkle despite having the trio of Wilfred Ndidi, Oghenegharo Etebo, and Alex Iwobi.

There was no cohesion, which allowed the Cameroonian players to walk past the midfield at will without any serious challenge.

Ahead of tonight’s game, it is expected that the German tactician would have addressed this issue and ensure that there is a smooth understanding between the midfield and the attack. Iwobi must learn to release the ball when due, while Ndidi and Etebo must be aggressive.

Regardless of who Rohr fields in this evening game, the players can’t afford to allow a repeat of Friday’s result.

Some of the Super Eagles players will be eager to make an impression knowing fully that this is the last friendly before the July 3rd game against Mexico.