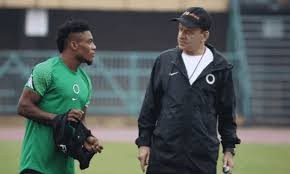 The Super Eagles played two back-to-back friendlies against their arch-rivals, but they could not manage a win in either of the two games.

Nigeria’s Super Eagles wrapped up their doubleheader friendly games against Cameroon with a boring 0-0 draw at the Wiener Neustadt Stadion in Austria on Tuesday evening.

The Super Eagles were seeking revenge going into the game after losing the first encounter last Friday, courtesy of a strike from Andre Anguissa.

While their play deserved at least a draw in the first game, the second clash was an eyesore. It’s a disappointing performance from the team, with their play lacking urgency and fluidity.

The display on Tuesday evening once again highlights why critics have been on the case of the team’s coach Gernot Rohr.

Although the German was without many of his important players for the two games, it was still a poor display from the team.

The Super Eagles did not look like a well-coached team on Tuesday evening, failing to string passes together while there was no creativity in the team.

Onuachu, who led the line in both games, failed to receive quality services, with the team failing to play to his strength.

Iwobi looked lost in both games, showing again why he’s not the answer to Nigeria’s creative/attacking midfielder conundrum.

The Everton star played in two different roles in the two games but was more of a passenger failing to impose himself on the game.

Iheanacho, who finally found his mojo in the just-concluded season, did not impress either in his role as the man behind the striker.

But away from the team’s general performance, one baffling decision from Rohr is his choice of players. The former Bordeaux manager had revealed the two games would allow him to try new players.

He repeated the exact words after the game on Tuesday, saying the result was not the most important thing, but watching the new players.

However, that was not the case as Rohr started the old guards in the first game and repeated the same lineup except for Ahmed Musa and Valentine Ozornwarfor for the second game.

Moffi, who was one of the revelations of the season in the Ligue 1 with 14 goals for Lorient, failed to start any of the games.

The youngster came on in the 66th minute in the first match and as a half-time substitute last evening. It’s a strange one because the conditions allowed Rohr to at least play him for the full 90 minutes in either of the games.

The three-time African champions were missing the service of Victor Osimhen, but Rohr stuck with Onuachu for the two games, reducing Moffi to a cameo role.

This decision again raises a question on Rohr’s thought process. The German has always criticised Onuachu’s style, so it’s a surprise to see the Genk man start the two games.

CHECK IT OUT:  “I’m An Exciting Player” – Dribbling Wizard Ejuke Introduces Self To CSKA Moscow Fans

Besides, there’s no better time to see Moffi’s qualities than in either of the two games. In the goalkeeping position, Rohr played the Maduka Okoye in both games even though he invited two others for the clash.

The 67-year-old revealed Uzoho would’ve started the second game, but he picked up an injury. However, there was Enyimba’s John Noble in the team, but Rohr never gave him minutes.

Given Okoye has already sealed his status as the team’s number one, it would have been reasonable to give Noble minutes in one of the two games since there’s nothing at stake.

It would also have allowed Rohr to score points against his critics who accused him of not giving players from the domestic league a chance.

Instead, Okoye played the full minutes of both encounters, which raises the question of why Noble was invited.

Peter Olayinka, Abraham Marcus and Samson Tijani are also players that should have had more playing time in these two games but only had a cameo role.

Meanwhile, the German tactician decided to hand Ahmed Musa a start in the second game, when it’s clear that the former CSKA Moscow is done at the top level and a distraction in the team.

The Kano Pillars star does not offer anything to the team, and he’s only playing because he wants to be the country’s all-time international cap holder.

He earned his 98th cap in Tuesday’s clash, and he’s just four games away from breaking Vincent Enyeama’s record of 101 appearances.

However, that’s not Musa’s fault as he doesn’t pick the team. Rohr has shown again he’s not ready to change and will only stick to his ideas.

CHECK IT OUT:  Olympics 2020: Nigeria Shocks United States In A Basketball Friendly Match

The former Burkina Faso coach has spent more than five years in charge of the Super Eagles, but there’s no much difference between this current team and the one of five years ago- even though he has more quality players at his disposal now.

If there’s anything learned from the two recent games, it only shows that Rohr has lost the plot, and he may have taken the Super Eagles as far as he can.