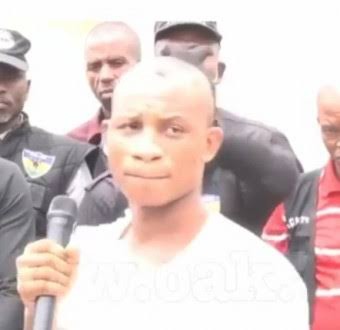 Police officers paraded a man who entices girls to the hotel using social media, has s3x with them, and blackmails them with their nudes.

The suspect, who claimed to be 23 years old, stated in his confessional statement that he has been doing this for several years.

“I have been on Instagram for several years I meet females online. I tell them about hookups. When they accept, they pay connection fee, pay their flight ticket from wherever they are to Port Harcourt. They pay the hotel fee. After having sex, I leave them stranded in the hotel and run away.

So of them, they would call me and I would tell them I am no more interested that it is a scam. Some of them I will tell them they shoyld send money for me to delete their nude pictures.”

The suspect denied that he drugs his victims.

He added that he costs them a certain sum to delete their nudes.

CHECK IT OUT:  Lady Strips Unclad In Church As Pastor Prays For Her (Photos)