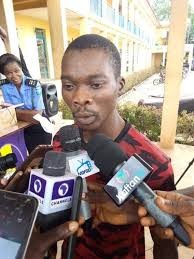 Gbenga Kikiowo, a 27-year-old armed robber, has claimed that he began committing crimes at the age of seven and aspired to be more popular than Ishola Oyenusi and Shina Rambo.

He made the announcement during a parade in Ondo State on Wednesday. “I started doing crimes when I was seven years old,” he claims. Because I was born into a wealthy household, I don’t have any true reasons for turning to crime.

“I joined the prisoners’ association that preaches the word of God from there the last time I was in prison. After having a dream in which I saw Pastor Adeboye of the Redeemed Christian Church of God praying for me, I was discharged and acquitted not long after.

“When I got back, I went to the RCCG in Akure and testified. They took me to the Redemption Camp with the intention of transporting me to a rehabilitation facility, but that was not what I required.

“What I really wanted was to find a job that paid well. As a result, I’ve decided to quit after six months. I escaped to Ile-Ife by stealing their pastor’s tricycle.

“My final hope was the gun with which the cops arrested me. I had made the decision to quit all of this local criminality and pursue a career in international crime. That’s why I decided to take a chance and look for a gun.

“Because I wanted my name to reign, I wanted to become an international armed robber like Ishola Oyenusi, Shina Rambo, and Mufu Olosha Oko. I believed that the only way for me to gain popularity was to commit crimes.”

CHECK IT OUT:  Sisters Reveal Why They Left Their Dead Mom To Decay In The House