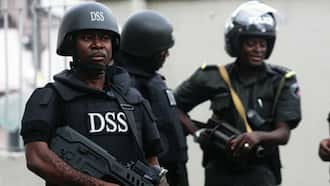 A Kano-based singer, Ahmad Abdul, accused of blasphemy in his latest song has been detained by the Department of State Security (DSS).

The agency, however, released the accused on Friday, June 18, on conditional bail, The Nation reported.

The agency stated that it took Abdul into protective custody to avert likely violent reactions against him from Kano residents.

Abdul’s song reportedly created near chaos and violence, following reactions from his followers in Kano state.

The singer, however, apologised for his comments, saying he made a mistake.

“I never knew the song was against Islamic teachings and could cause uproar. I wouldn’t have done it. But I have now understood the implication and I accept my mistakes.
“I hereby tender my heartfelt apology to Kano people -Ullamas, the government and the State Censorship Board.”
Premium Times reported that the executive secretary of the Kano state censorship board, Ismaila Afakallah, said he reported the singer to the DSS which arrested him.

Afakallah stated that he had received hundreds of petitions against the song from concerned citizens.

Loading... Lille manager, Christophe Galtier, has said he is not …