Posted By Udokabestluv On July 7th, 2021 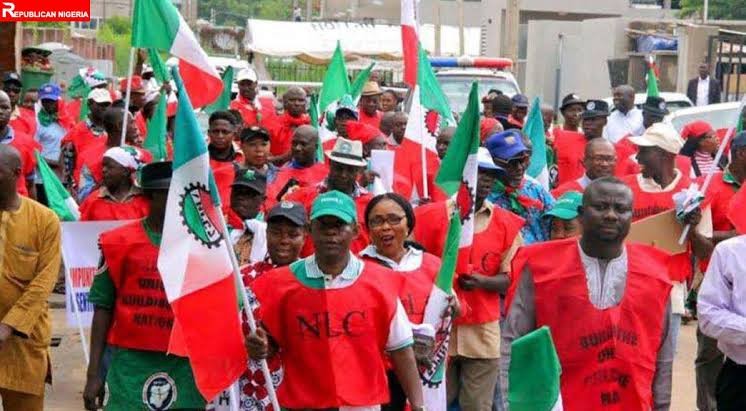 It would be recalled that labour had on June 15, embarked on strike action to press home it’s demand for full implementation of new national minimum wage, pending promotion salary arrears among other welfare for the workers in the state

State Chairman of the Nigeria Labour Congress (NLC), Comrade Yusuf Iya who announced the immediate suspension of the strike shortly after signing a Memorandum of Understanding (MoU) with the government at the Government House, directed workers to resume at their duty post with effect from July 6.

The NLC chairman lauded traditional rulers and other stakeholders for their intervention in the resolution of the face-off.

The state’s Attorney-General and Commissioner for Justice, Dr Abdulkarim Kana after the meeting read the agreement before labour leaders and representatives of government led by the Head of Service, Abari Aboki, signed in the presence of Gov. Abdullahi Sule.

According to the Attorney-General of the state government had agreed to commence the implementation of over 10 years of outstanding promotions of workers from August 2021.

Kana said that the government also agreed to pay the last tranche of the August 2016 unpaid salaries immediately.

On the issue of the N30,000 minimum wage, the commissioner said that both parties agreed for implementation for workers from grade levels one to Seven, while negotiation would continue on the consequential adjustments for workers on grade levels seven and above.

He also said that parties agreed that no worker would be victimised for participating or refusal to join the strike.

Kana said that parties also agreed that government should introduce a development levy for all categories of income earners for the next 12 months to enhance the revenue profile of the state in order to meet its obligations.

On his part, Governor Abdullahi Sule expressed gratitude to the Traditional Council of Chiefs led by its Chairman, retired Justice Sidi Bage, the Emir of Lafia, for their intervention to end the labour dispute.

He also commended labour leaders for exhibiting maturity, adding that the government was very civil while the industrial action lasted by not using excessive force to show that they were in charge.

The governor acknowledged that the suggestions by the union on how to fund the implementation of what was agreed upon were highly appreciated.

He, therefore, appealed to workers to join hands with his administration to boost the Internally Generated Revenue of the state for development to thrive.

Loading... The Minister of Transportation, Mr Rotimi Amaechi, says the …