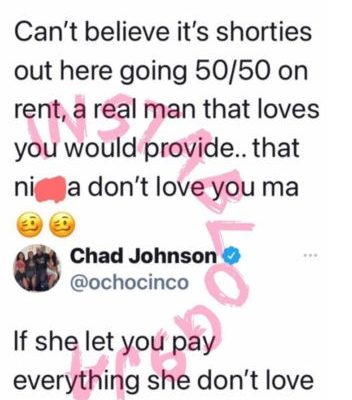 Chad Johnson, also known as Ochocinco, an ex-American footballer, has responded to a Twitter user who stated that a man who loves a woman would not allow her to spill cash.

Papi Ace, a Twitter user, was delivering a message to someone who splits the rent with her boyfriend by paying half and the boyfriend paying the other half.

He tweeted, ‘Can’t believe it’s shorties out here going 50/50 on rent, a real man that love you would provide… that nigga don’t love you ma.’

Chad Johnson, in response to his tweet, disagreed with him, claiming that if the woman lets you pay for everything, she doesn’t love you, and advising people not to fall for the “okie doke.” 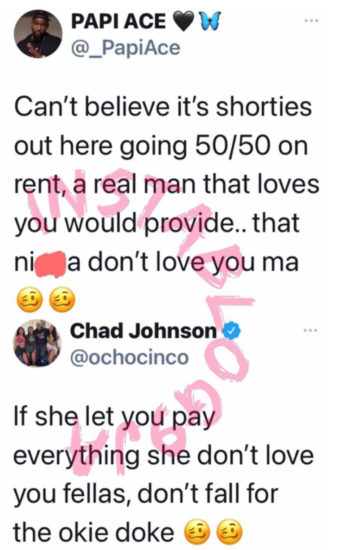 The post Ex-American Footballer, Ochocinco, Replies Man Who Said A Man Who Loves A Woman Wouldn’t Allow Her To Spill Bills appeared first on .

CHECK IT OUT:  Adesua Etomi eulogizes husband, BankyW in a tribute