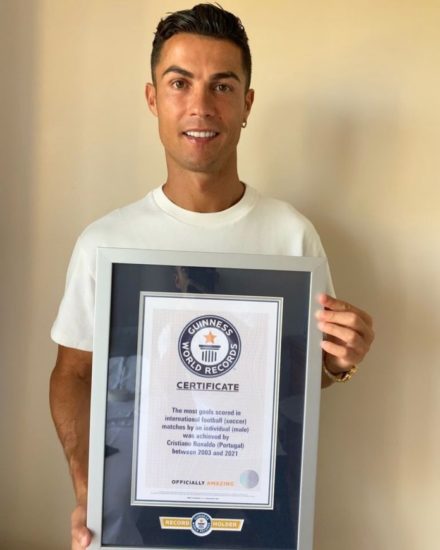 Ronaldo has been rewarded for breaking iconic record for most goals scored in international matches.

The year was 2003 when up-and-coming football promise, Ronaldo was described as “one of the most exciting young players I’d ever seen” by Manchester United manager, Sir Alex Ferguson.

Soon after, he became United’s first Portuguese recruit.Today, he’s the top-scorer player in the world.

The Portuguese football player has broken the record for most goals scored in international soccer matches (male) during the Portugal vs Ireland match played on 1 September 2021 at the Algarve Stadium (Portugal).

Previously, Ronaldo shared the record with Ali Daei (Iran), who scored 109 goals between 1993 and 2006. Against Ireland, a few minutes before the end of the match, Ronaldo broke his own record with the striking number of 111 goals.

CHECK IT OUT:  Wizkid Celebrates His 31st Birthday Today