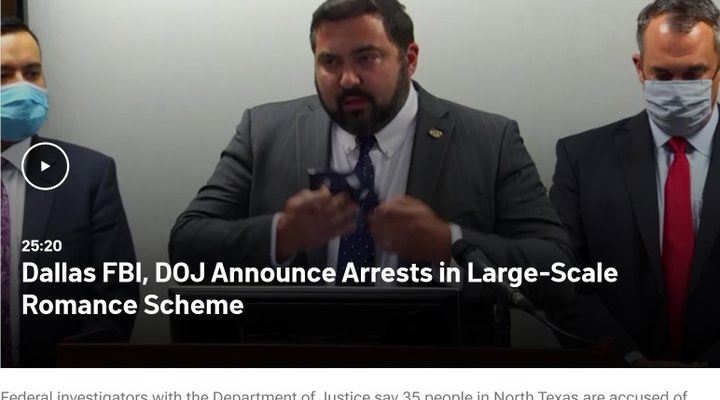 Federal investigators with the Department of Justice say 35 people in North Texas are accused of conducting romance schemes to defraud and steal money from older adult Americans.

Officials with the U.S. Attorney’s Northern and Eastern Districts of Texas and the FBI announced a multi-year investigation into a wide-ranging criminal enterprise operating out of North Texas.

Investigators announced indictments for criminal charges against 35 people accused of wire fraud and money laundering as part of a very sophisticated scheme that stole more than $17 million from more than 100 people nationwide.

According to court documents, these defendants allegedly preyed on older victims, many of whom were widowed or divorced. They assumed fake names and trolled dating sites like Match.com, ChistianMingle, JSwipe, and PlentyofFish, searching for targets.

Conspirators would pose as an interested partner and then build a level of trust with their target before eventually sharing a sob story that ended with them needing a large sum of money.

Crimes like these are especially despicable because they rely not only on victims’ lack of internet savvy, but also, their isolation, their loneliness, and sometimes their grief,” acting U.S. Attorney Prerak Shah said at a press conference announcing the charges. “The only mistake these victims make is being generous to the wrong people.”

In many cases, investigators said, the alleged thieves would then siphon thousands of dollars from their victim’s bank accounts.

“Once they depleted the savings they vanished into thin air,” said Shah.

Investigators said the funds are taken from the victims eventually made their way to accounts located in Africa and Asia.

CHECK IT OUT:  #FreeMubarakBala Trends As Atheist, Mubarak Bala Is Arrested In Kaduna For ‘Blasphemy’

Those charged in the Northern District of Texas include:

CHECK IT OUT:  Two Men Agree To Exchange Their Wives And Kids As Settlement
(Visited 24 times, 1 visits today)