Posted By Udokabestluv On October 1st, 2021

Cristiano Ronaldo scored the winning goal for Man United on Wednesday but his driver had contrasting fortunes prior, waiting hours at a petrol station but being unable to fill up the striker’s £164,000 Bentley

Cristiano Ronaldo’s driver waited nearly seven hours to fill up the Manchester United star’s Bentley but left without any petrol amid the ongoing fuel crisis crippling the United Kingdom.

The newly-purchased £164,000 Bentley Flying Spur was pictured at a Shell forecourt near to the Man United star’s home on Tuesday.

The supercar pulled up at 2:20pm and waited six hours and 40 minutes before finally leaving just after 9pm when the driver lost all hope that any petrol would be delivered.

The Bentley was accompanied at the petrol station by a Range Rover being driven by one of Ronaldo’s bodyguards.

A source said “Even with all Ronaldo’s money, he’s in the same boat as the rest of us.”

“His security waited for hours obviously hoping a tanker would eventually arrive but they were forced to drive off. The two men looked so fed up waiting in the rain.”

His most expensive cars include a Ferrari Monza which has a valuation of £1.4million, a Bugatti Veyron Grand Sport valued at £1.7million and a £2.15million Bugatti Chiron.

CHECK IT OUT:  Four Healthy Habits Of Players To Keep You Fit

But United saw Ronaldo’s personal value on the pitch on Wednesday when he struck in the 95th minute to seal three priceless points for Ole Gunnar Solskjaer and co. in a Champions League win over Villarreal.

Post-match, the man himself told MUTV : “[It was] unbelievable! Another chapter, another beautiful chapter, so I’m so happy to score the winning goal and the way I did it.

“The most appearances in history and to score a goal. A great night. I have to mention the attitude of the team which is the most important [thing] here.” 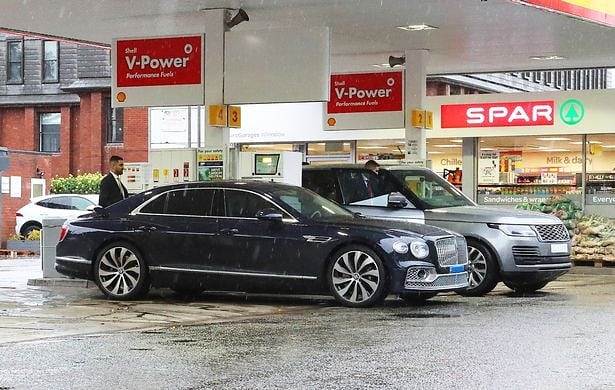