Dancer, Janemena has dared the actress, Tonto Dikeh to release the sex tape she has of her.

Tonto Dikeh who had drawn Janemena attention to the fact that Prince Kpokpogri is in possession of some of her sex tapes was however sued by the dancer who demanded a public apology and 500 Million naira compensation for involving her in their messy squabble.

Reacting to this, Tonto reaffirmed the fact that her sex tape exists, but stated that she wouldn’t be releasing it. Janemena on her part, took to her Instastory where she dared the mother of one to release the sex tape she claims exist either through a fake page or a blogger. 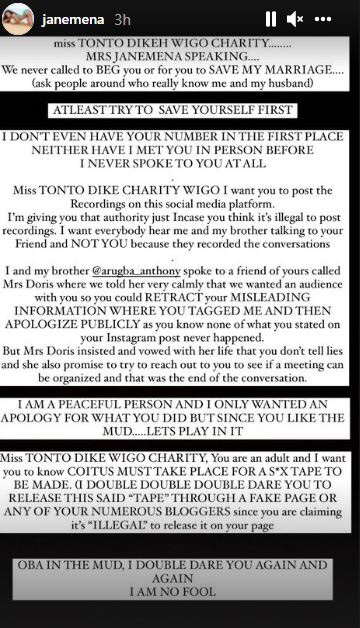 The post Janemena tells Tonto Dikeh to release her s3xtape if it exists appeared first on .

CHECK IT OUT:  Presidential Election: Why EFCC Should Investigate Tinubu – Omokri