“They No Born Them” – Falz Urges Youths To Desregard Police Threat Over October 20 #EndSARS Memorial Protest - NaijaCover.Com
Skip to content 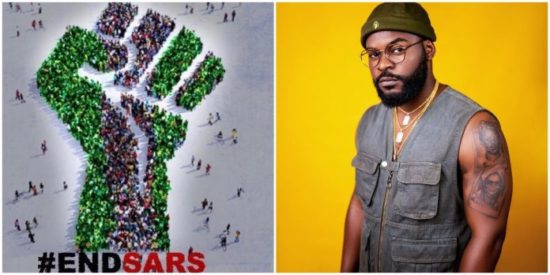 Falz stated this during the ongoing Felabration, the annual festival of music and arts, celebrating the life, times and legacy of the late legendary singer, Fela Anikulapo Kuti.

He said in pidgin English, “October 20 don dey come like this, for your information, police commissioner say make we stay inside, una hear abi una no hear? Them go dey disguise. They said on that very day, make we no commot. Dem dey craze? No matter how many them be. As I dey talk to you now, police don station for toll gate. Una go commot abi una no go commot? They no born them… (October 20 is coming; for your information, the police commissioner has said we should stay inside. Have you heard that? They said on that day, we should not go out to protest; they are crazy. It does not matter how many police personnel they bring. Already, police officers have been stationed at Lekki Toll Gate. Will you go out to protest or not? They dare not…)”

His comment comes as the Lagos and Oyo states police commands warned protesters against protesting, saying such would be repelled.

The post “They No Born Them” – Falz Urges Youths To Desregard Police Threat Over October 20 #EndSARS Memorial Protest appeared first on .

CHECK IT OUT:  ITS OVER! John Terry Will NOT Be Chelsea Coach Any Time Soon (See Why)