Terrorists Who Tried to Remove Me from Office Are In Nigeria, Turkish President Says - NaijaCover.Com
Skip to content 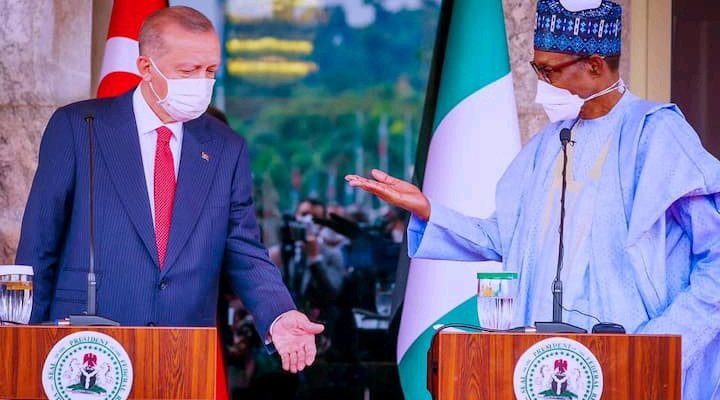 President Recep Tayyip Erdogan of Turkey says the Fetullah Terrorist Organisation (FETO), which he blamed for the July 15, 2016, failed coup attempt against his government, is still active in Nigeria

Daily Trust reported that Erdogan said this on Wednesday, October 20, at a joint press conference with President Muhammadu Buhari on the occasion of his official visit to Nigeria.

The Turkish president asked Nigeria to join his country to forge solidarity in the fight against terrorism in the two countries as one of the oldest allies of Turkey in Africa.

He said Turkey has been closely monitoring the developments unfolding in Nigeria, describing the nation as brotherly and friendly.

Erdogan noted that his government will cooperate with Nigeria in the fields of military, defense, and security with the aim of defeating the terrorist organisations, armed gangs and bandits threatening the country’s peace.

As we’re probably aware of the fact that Turkey has been fighting against terrorist organisations for many decades, such as the PKK, PYD, FETO, DASH and other terrorist organisations.
“The perpetrator of the heinous failed coup of July the 15th, FETO, is still illegally active in Nigeria, and we are continuously sharing our intelligence with the Nigerian interlocutors and authorities. I hope and pray that our Nigerian brothers will forge a closer solidarity in this field with us, the Republic of Turkey. I hope and pray that our visit will yield the most auspicious results and I would like to thank my distinguished brother, President Buhari, for being such a gracious host for me and for my delegation.”

The post Terrorists Who Tried to Remove Me from Office Are In Nigeria, Turkish President Says appeared first on .

CHECK IT OUT:  #JusticeForChima: Father Breaks Down In Tears, As He Loses Son To Police Torture
(Visited 11 times, 1 visits today)