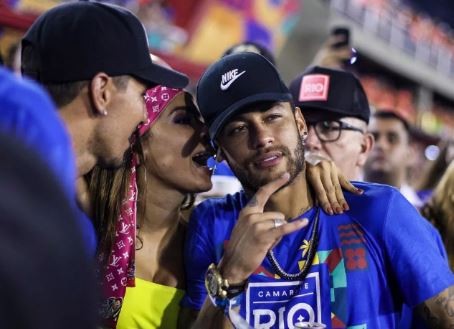 Football star Neymar was spotted partying with stunning pop sensation Anitta at the Rio Carnival as he continues his party tour of Brazil.

The Paris Saint-Germain superstar, 27, is recovering from a foot injury and will miss his side’s Champions League last-16 second-leg clash against Manchester United tomorrow.

PSG want him to return to support his team-mates but Neymar appears to be loving life during party season in his homeland, partying with a woman who looks just like his ex-girlfriend Bruna Marquezine.

He let his hair down at a carnival in Salvador, Bahia, three days ago and kept up the fun last night. Neymar who is expected to return to Paris today was seen smooching Anitta, 25, on the cheek, getting close to one blonde beauty and dancing alongside a host of others.

He also found time to hang out with his world champion surfer pal Gabriel Medina. Neymar and Anitta have been linked in the past and reports from Brazil said they partied in the same box at the carnival.

It was also claimed Bruna was there but did not speak to her former boyfriend. Bruna unfollowed Anitta on Instagram during the night but quickly returned to follow her again.

One Brazilian website claimed model and actress Bruna did not mind the two appearing to enjoy each other’s company.

CHECK IT OUT:  COOL THINGS!! Checkout 4 Interesting Things You Can Do With Cement (A Must See)