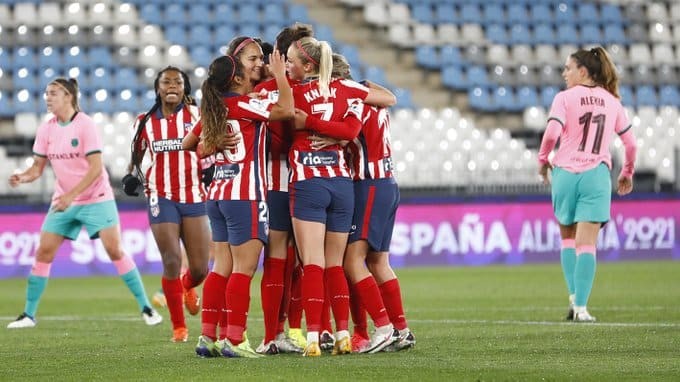 Rasheedat Ajibade is still waiting to make his debut for Atletico Madrid, but Las Colchoneras stunned Barcelona in their Supercup semifinal.

Barcelona had not lost a game this season going into the encounter, but Atletico proved a tough nut to crack with Dani González ladies edging out the Spanish champions on penalties.

While Ajibade did not feature for Atletico, Oshoala was a second-half substitute for Barcelona. However, she could not add to her ten goals this season.

The Catalans dominated most of the first half, and could have taken the lead on two occasions, but were denied by Hedvig Lindahl in Atletico’s goal.

However, Atletico grew into the game in the second-half, and they took the lead in the 66th minute courtesy of a penalty from Merel Van Dongen.

Las Colchoneras were on course for a stunning victory until Alexia Putellas struck in the 90th minute to send the game into extra-time.

Neither side could find the winners in the 30 minutes, and the game went into penalties. And it was Dani González side that held their nerve to secure their spot in the final, where they will meet Levante.

CHECK IT OUT:  Angry Girlfriend Ties Her ‘Abusive’ Boyfriend Up In Bed, Stabs Him With Bottle In Delta