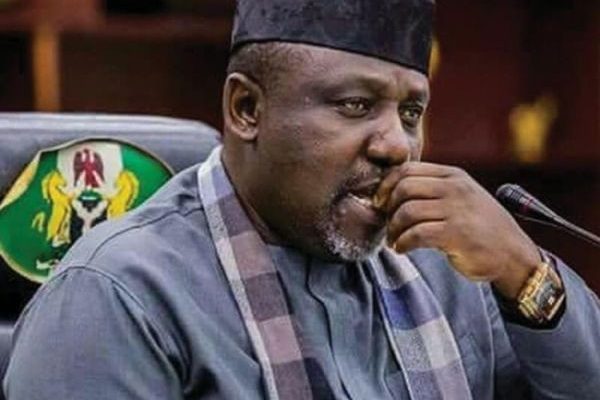 Gov. Rochas Okorocha of Imo State says the National Chairman of All Progressives Congress (APC), Mr Adams Oshiomhole, and the party’s governorship candidate, Sen. Hope Uzodimma, are to blame for the inability of the party to win the governorship election.

He said posterity would judge the two for their alleged roles in the election.

In a release issued by his Chief Press Secretary, Mr Sam Onwuemeodo in Owerri on Thursday, the governor alleged that Uzodinma worked for Peoples Democratic Party in the just concluded elections.

He said Uzodimma was one of the first to celebrate with the PDP Candidate, Chief Emeka Ihedioha, after he was declared the winner of the election, citing a video of the two contestants as proof of his guilt.

“We had maintained that Chief Uzodinma was just a mole in the APC and today, the governorship election in the state and its outcome have obviously vindicated us, aside the fact that a video of Chief Uzodinma’s celebration with Ihedioha has gone viral on the social media.”

He also alleged that Uzodimma succeeded in the alleged plot by ensuring only his supporters were made agents of the party, adding that his target was to destroy APC in the South-East.

“Chief Uzodinma succeeded through Adams Oshiomhole to ensure that only his supporters were made agents of the party, from the list he sent from Abuja to the Independent National Electoral Commission.

“Unfortunately, none of Uzodinma’s and Oshiomhole’s approved agents were seen either at the ward, local government or at the state level ; they didn’t care about the election and its outcome.

“At the end of the day, the APC candidate came fourth. And he has been celebrating with the PDP candidate.”

“Their target as it has been shown now is to totally destroy APC in the South-East and in Imo in particular, thereby authenticating the claim in some quarters that it is all about 2023.

“We had equally maintained the contention that Imo people would not vote for Uzodinma because they know him very well, but Oshiomhole refused to listen.

“He came fourth and never showed that he took part in the election; Posterity and history will Judge Oshiomhole and Uzodinma over the fate of APC in the South-East, especially in Imo State,” Okorocha said (NAN)

CHECK IT OUT:  I Have Moved On With My Career Cause My Tenure Is Over – Ambode Says In Emotional Farewell Message