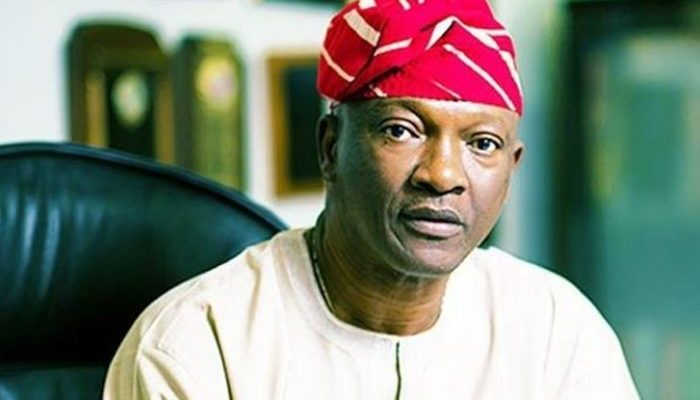 Chief Tunji Shelle, a former chairman of the Peoples Democratic Party (PDP) in Lagos State has blamed Jimi Agbaje, the governorship candidate of the party in the just concluded elections for the humiliating defeat the party experienced in Lagos.

Speaking in an exclusive chat with Daily Independent, Shelle who was in charge when the party won eight seats in the House of Assembly in the Lagos State House of Assembly during the 2015 general elections said Agbaje can never fly the party’s flag again in the future.

He said rather than unite the party leadership, Agbaje sowed a seed of discord and rebuffed entreaties by well-meaning Nigerians to join hands with leaders in Lagos PDP so as to achieve good results.

“We have a situation where somebody said he could work and achieve victory alone. Meanwhile, he doesn’t know anything. Rather than show cooperation, he was arguing and fighting people who could help him. Even when things were going bad and help was to be rendered, he said he doesn’t need help”.

“Well-meaning people intervened to rally everybody together in Lagos. They called us to a meeting and asked us to help him but he refused, saying he doesn’t need help. He became a lone ranger and stand-alone person”.

“ Even when we were trying to reinforce his campaign team, he told us point blank that he couldn’t work with people he can’t control. He wants to be a master of all and subject everybody in the party under his control which is not possible. You can’t control everybody because PDP is not your private party”.

CHECK IT OUT:  HE IS GOOD! Arsenal In Talks To Sign This Porto Star Player (Photo)

“So, we decided to leave him to go and do the job alone and at the end of the day, that is the result we got in Lagos. That is the major reason why PDP failed in Lagos”.

“If not for the sympathy votes we got from people who are tired of APC and felt there is need for leadership change in Lagos state, we could have gotten lesser votes in the governorship election. To be frank, our governorship candidate was our problem in Lagos state”.

“He defeated the party and defeated himself. The most unfortunate thing is that he doesn’t feel the pain of what he has caused. Also, there was mismanagement of resources too because everybody left him to his fate to do whatever pleases him”.

Speaking on Agbaje’s chances in future elections, Shelle said Agbaje stands no chance of getting the party’s ticket because he is no longer acceptable to all.

“I am sure he must have realised the fact that he is not acceptable again. He himself knows that the party has rejected him. He should just go and hide somewhere so that PDP can have peace. We shall rise again because this is the last chance of APC in Lagos” he said.

CHECK IT OUT:  Bentley! Bobrisky screams as he poses with a Bentley car (Photos)