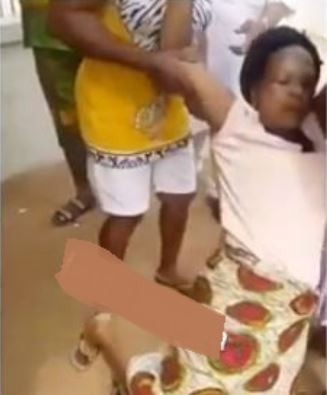 A woman has been left really heartbroken after finding out some fraudsters had stolen a massive N400k from her account.

A video has emerged online showing the utter grief of a woman whose money was stole by fraudsters.

Local reports show that the woman and her children who suspected that something was amiss with her bank account, rushed to an ATM point to make confirmation.

When they got to the ATM point, they begged the people on the queue to let them check the woman’s account balance. When they check the balance, the woman burst into tears, collapsing on the ground.

She later revealed that fraudsters had taken away her N400k in her bank account. The distraught woman had to be consoled by the people at the ATM point. The sad incident happened on Saturday, March 30, in Delta state.

The current condition of the woman is not known.

Watch the below below:-