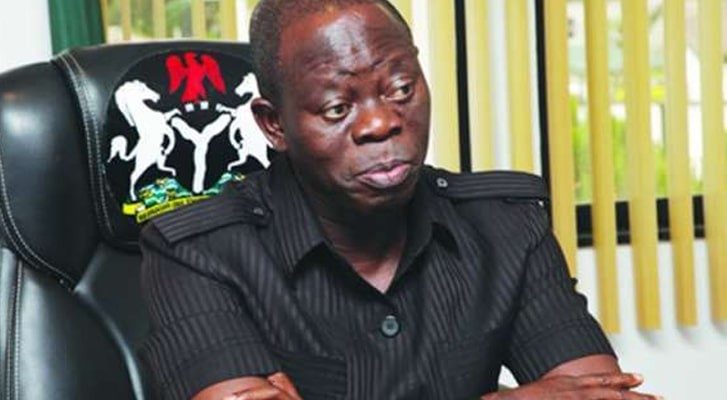 On Tuesday night, Adams Oshiomhole, the All Progressives Congress National Chairman called the opposition Peoples Democratic Party, ‘the devil’, which the APC would never share power with in the 9th National Assembly.

He insisted that the party had a comfortable majority in both chambers of the National Assembly and could decide on the choice of presiding officers without depending on the PDP to succeed. Oshomhole was speaking at the Presidential Villa, where President Buhari played host to House of Representatives member-elect at a lavish dinner.

It was also a session where he presented the current Majority Leader of the House, Femi Gbajabiamila, as the APC’s anointed candidate for the speaker of the 9th House.

“If you are elected, it means you are tested and trusted. The National Working Committee (of the APC) had a meeting with representatives-elect, three weeks ago and it was very revealing. Their intervention is a clear confirmation that Nigerians did not make a mistake by electing them.

Their deep knowledge of the constitution would convince many that they were not first timers but seasoned lawmakers.

“On their own, speaker after speaker, across the zones, pledged to work together for Mr President to lay a landmark foundation for a new Nigeria.

“I am confident that this time around, they are very hungry Nigerians ready to deliver on the mandates at the campaigns.”

He berated the leadership of the current 8th National Assembly, alleging that both Bukola Saraki and Yakubu Dogara remained hostile to the executive in the last four years. He added that with its majority of 223 members out of 360 members in the incoming House, the APC would neither need the support of the PDP nor share power with the opposition.

CHECK IT OUT:  I Never Sent Thugs To Attack Dickson – Police Commissioner

“In life, mistakes are permitted but it becomes a problem if the mistake is repeated twice. We are determined not to repeat the mistakes of 2015 in 2019, we have learnt our lesson.

“Out of 223 APC elected members, about 67 were re-elected, the rest are new members.

“In other climes, you don’t go into coalition when you are in the majority, you do so when you don’t have the numbers.

We have the numbers, out of 360, Nigerians elected 223 APC members because they don’t want Mr President to face the trauma of 2015.

“Most of those who defected were rejected and even those who led it were uprooted. We cannot as a part, which has a comfortable majority, entrust critical committees in the hands of the PDP or the opposition.

“If Nigerians wanted them, they could have voted them. In the days of PDP, every committee was chaired by PDP members.”

Describing the PDP in unprintable language, he went on,

“We do not need to do business with the devil for us to survive in the ninth assembly. “In the African family, we sit down in a closed door to address issues, the good news is that there is a role for everyone.

“Neither Mr President nor the party expects the National Assembly to be a rubber-stamp; we don’t even have rubber. But we will not fight in Wuse market.

“Both the re-elected and new members are entitled to heading committees “We have asked our people not to share what belongs to us with other party members. “I don’t have apologies against forces of retrogression.