“I Won’t Leave Your Wife” – Man Tells Neighbour After Sleeping With His Wife - NaijaCover.Com
Skip to content 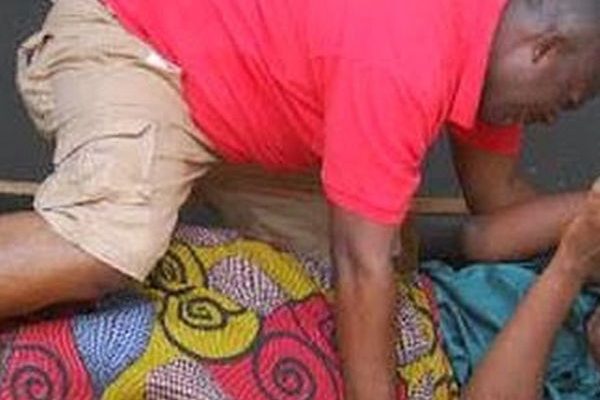 A 26-year old man, Nonso Nwosu, who was caught sleeping with his neighbour’s wife, has vowed telling her husband that he will not leave his wife despite the fact that the husband had known that he was sleeping with her.

The incident happened at Aina Street, Ahmadiya area of Ijaiye Ojokoro, Lagos where they reside.

He was said to have threatened the man’s wife that he would upload her nude pictures online if she refused him sex anytime he demanded for a romp.

It was gathered that the embattled woman fell in love with Nwosu and reportedly slept with her on several occaions without the knowledge of her husband despite the fact that they were married and had children.

The love affair between Nwosu and the woman was said to have leaked which prompted her to confess to her husband explaining that it was temptation, asked for forgiveness and the husband accepted.

However, Nwosu continued to pester her for sex but she refused. He then resorted to threatens to expose her nude pictures on the internet. It was at that point that the woman informed her husband about her predicament over the threats by Nwosu.

The husband then approached Nwosu and told him that his wife had confessed to him about the illicit relationship between them and he had forgiven her in order to save their marriage.

The husband asked him to delete the nude picture so that they would move on with the marriage.

Nwosu refused insisting since he had slept with his wife, that the relationship must continue and the husband will have to bear the situation as they have to share the wife together as neighbours because he was yet to marry.

CHECK IT OUT:  Boyfriend From Hell! See The Herdsman Who Beheaded His Own Girlfriend In Ekiti (Photo)

He threatened to upload the nude pictures if the wife denied him sex any time he demanded a romp from her.

The matter was reported to the police at Ojokoro Division; Nwosu was arrested and detained at the police station for interrogation.

He reportedly told the police that the woman was his lover and he was not ready to leave her.

The police found him culpable and then charged him before the Ogba Magistrates Court for threatening to post the nude pictures on the internet and being in possession of Nigerian Army uniform which was found in his room.

The prosecutor, Supol Benson Emerhi, asked Court for a date for hearing in order for the police to prove the charges against him since he pleaded not guilty.

The Presiding Magistrate, Mrs. O.Sule Amzat, granted him bail in the sum of N200,000 with two sureties in like sum.

He was remanded in prison custody pending when he will perfect the bail conditions.

When the husband was contacted, he declined to speak on the issue and only said that whatever had happened were in the past and he was in support of his wife to overcome the temptation in the interest of their marriage.

The post “I Won’t Leave Your Wife” – Man Tells Neighbour After Sleeping With His Wife appeared first on Naijaloaded | Nigeria’s Most Visited Music & Entertainment Website.

CHECK IT OUT:  Ex-Big Brother Naija Housemate, BamBam Confirms She Is Pregnant