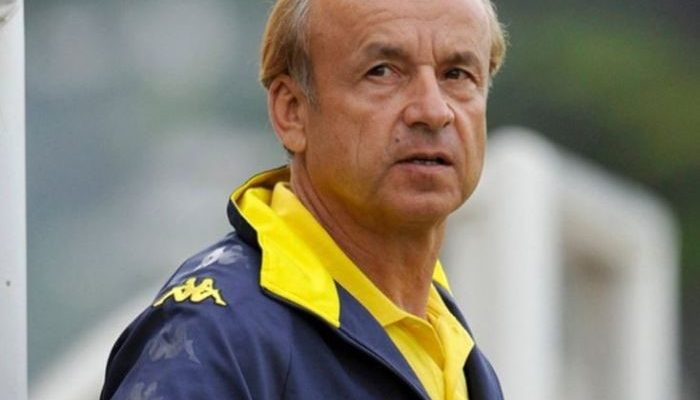 Just a month plus to the beginning of the 2019 Africa Cup of Nations, the Super Eagles’ Technical Adviser Gernot Rohr is not a happy man.

This was revealed to newsmen by a very close source to the team who spoke on the condition of anonymity.

The source further revealed that the Franco-German Coach’s contract has been severally breached by the leadership of the Nigeria Football Federation who contracted Rohr.

“There are certain clauses in the contract of Coach Rohr that is known to only the NFF and the Coach. Since the Coach is a very close friend he has often complained bitterly to me that his financial benefits have not been met by the NFF.

“The last time Rohr received his salary was December 2018 and the three months ahead payment was not done as it was widely publicised then.

“Even as we speak right now the Coach still didn’t get his salaries from January 2019 up to date. So how do you want him to be happy going into the final lap of preparations for the 2019 AFCON in Egypt? In fact the only thing that can make him happy is for the NFF to pay his salary up to date before going to the AFCON competition.

“Another thing that the Coach is really complaining about is the non reimbursement of the expenses incurred in Niger Republic when he was with the Flying Eagles for the U20 Africa Cup of Nations.

“This money that he spent on the trip including flight ticket and hotel bills are yet to be paid after he made several attempts to get refund from the NFF.

“All these and other undue pressures have made the job very difficult for him. If not for the sake of some senior players in the team he could have called it quits. But something has to be done to make the job conducive for him to concentrate on his duties”, the impeccable source disclosed to newsmen.