On Friday, it was reported that Mrs Funke Olakunrin, a 58-year-old woman heading to Ore Junction from Akure, Ondo State, when she was attacked and shot by the herdsmen.

Femi Joseph, the Ondo Police Public Relations Officer (PPRO), had earlier confirmed the killing, saying the suspects were herdsmen who also engaged in an armed robbery.

He said the herdsmen attacked three vehicles, including a luxurious bus belonging to the Young Shall Grow Motors, adding that the passengers in the luxurious bus were traveling from Imo State to Lagos.

Joseph added that Mrs Olakunrin was the only one killed in the incident.

Olakunrin is the second child of 94-year-old Fasoranti to die. The elder statesman had also lost a daughter, Bunmi, some years ago, Fox Meek reports.

Presidential spokesman, Femi Adesina, in a message posted on his Twitter page, said President Buhari “prays God to give Pa Fasoranti fortitude to bear the loss.”

He wrote; “President Muhammadu Buhari condoles with Afenifere leader, Pa Reuben Fasoranti, whose daughter, Mrs Funke Olakunrin was killed along Ondo-Ore road by those described as armed robbers by Ondo Police Command. He prays God to give Pa Fasoranti fortitude to bear the loss.” 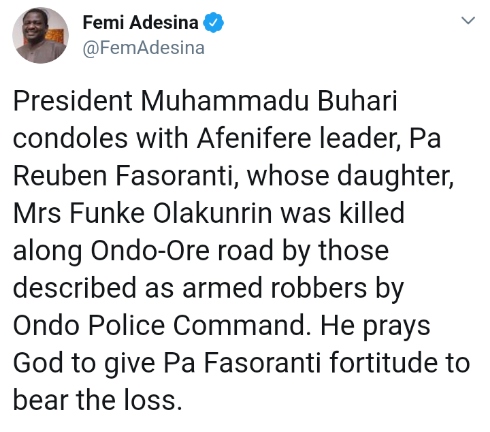 CHECK IT OUT:  Internet Fraudsters Assassinate Lawyer For Ripping Them Off Of N18m