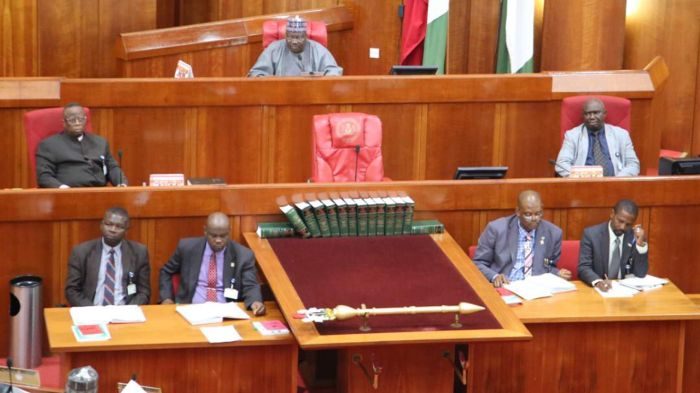 The Senate yesterday mandated its committees on Navy, Marine Transport and Finance to carry out a comprehensive investigation into the activities of Messrs OMLS Limited and other security agencies at the Safe Anchorage Area of the Lagos ports.

According to the News Agency of Nigeria (NAN), the team is to determine the legality of its operations and revenue and report back to the upper legislative chamber in four weeks.

The resolution was a sequel to a motion sponsored by George Sekibo (PDP-Rivers East) during plenary on “Illegal security activities by Messrs OMLS Limited at the Safe Anchorage Area of Lagos ports and the need to investigate their excesses.”

He had noted that it was the statutory responsibility of the Nigerian Maritime Administration and Safety Agency (NIMASA), the Nigerian Navy and the Marine Police to ensure security and safety within the nation’s territorial waters.

Sekibo further said the security company registered in the name of OMLS Limited had since 2014 allegedly carried out a provision of security at the facility for fees without recourse to the Nigerian Ports Authority (NPA).

He explained that the NPA by virtue of the Ports Act of 1954 had the responsibility of securing the area.

Sekibo, who is chairman of the committee on navy, claimed that the security firm charges every ship that anchors within the area $2,500 on the first day of anchorage and $1,500 daily subsequently.

“It takes between 28 to 30 days for ships that anchor at the Safe Anchorage Area to exit,” he said.

CHECK IT OUT:  New Banger Alert! Broda Shaggi Teams Up With Zlatan On A New Song Titled “Okoto” (Snippet)

Contributing, James Manager (PDP – Delta South) noted that the marine transport industry if properly managed would generate a lot of revenue for the country.

In his remark, Senate President Ahmad Lawan reminded the committees that they have got a major national assignment at hand, urging them to handle the task with the seriousness it deserves and keep to the timeline.

Besides, the Senate Committee on Ethics, Privileges and Public Petitions has recommended that a native of the Federal Capital Territory (FCT) be included in the Federal Executive Council as a substantive minister in deference to an existing court order.

At the end of a public hearing on a petition sent to the red chamber regarding the agitation by natives of Abuja on the matter, the committee chairman, Ayo Patrick Akinyelure (PDP – Ondo Central), stated that President Buhari would be informed of the decision.

Also yesterday, the Senate directed its Committee on Water Resources to probe the delay in the execution of Kagara dam in Niger State despite the receipt of funding to the tune of N7.7 billion from the Federal Government.

The upper chamber also called on the government to consider the socio-economic importance of the project and see to its completion without further delay.

The project, awarded 27 years ago and covering approximately 1000 hectares, is to provide portable water and cater to the irrigation need of the people of Kagara and its environs.

The decision followed a motion of urgent national importance sponsored by Muhammed Sani Musa (APC, Niger East) and co-sponsored by 19 others.

CHECK IT OUT:  Federal Government Urged To Disband Hisbah Police Over Illegal Activities