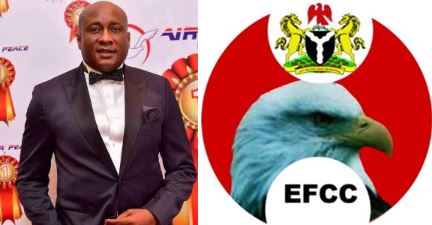 The Economic and Financial Crimes Commission (EFCC) has reportedly seized the passport of Allen Onyema, chief executive officer of Air Peace, over alleged bank fraud and money laundering in the US.

According to The Nation, the Air Peace boss, Allen Onyema’s passports will remain in custody of the anti-graft commission as investigations continue and his movements, temporarily restricted.

Recall earlier last month, US authorities had said Onyema moved more than $20 million from Nigeria through US bank accounts in a scheme involving false documents based on the purchase of aeroplanes.

Onyema was indicted alongside Ejiroghene Eghagha, the airline’s chief of administration and finance, who is said to have committed aggravated identity theft in connection with the scheme.

A US court was also reported to have issued a warrant to arrest Onyema and authorized US marshals service to bring him into custody.

According to news reports, the fate of the Air Peace boss and Eghagha hangs on the Mutual Legal Assistance Treaty (MLAT) between Nigeria and the US. The treaty borders on the extradition of suspects to face trial in either country.