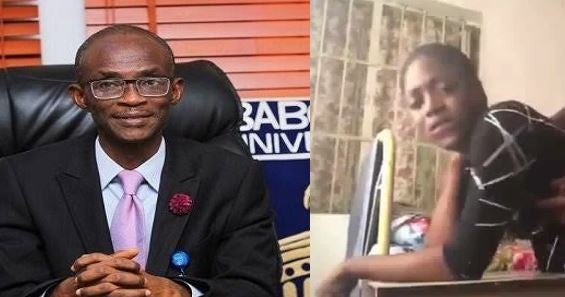 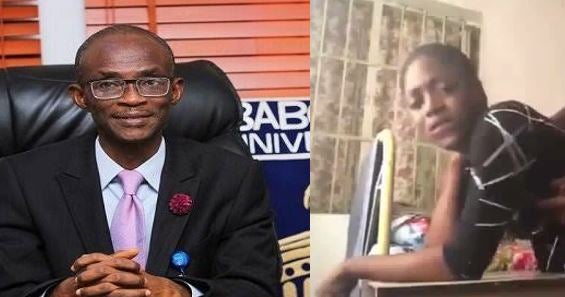 Vice-Chancellor, VC of Babcock University, Ilishan-Remo, Prof. Ademola Tayo, reportedly mentioned that giving blow job is abnormal, while stating the reason why a student in a viral sex tape was expelled by the school.

Last month a video surfaced of two students making out in what was later said to be a hospital ward. The boy was said to have been expelled before the incident while the girl was expelled as a result of the video.

Speaking during a luncheon with journalists at the Babcock Guest House on Sunday the VC said:

“We had to take that decision in order to protect this institution and to protect its alumni. Because anywhere they go they say the University where they are all prostitutes.

They said the girls are always swallowing …and all kinds of ridicule. If we keep mute, in the public opinion they would think that anything goes in the institution.

We had to make a statement to show discipline.

“But I need to tell you that I signed it off with tears in my eyes as a responsible father. But we are not leaving this young lady to her doom. The pastor called me last week and I prayed with the family.

The father called me and said pray with your daughter. I said she is still my daughter. Sometimes discipline is therapeutic. It is when you go that you realise that this is not right what I have done and then you go back to yourself.

“I look forward to a time when this young girl would graduate and be celebrated. It may not be here; I don’t know where but we are not throwing the baby out with the bath water.”

CHECK IT OUT:  4 Turkish Expatriates Abducted In Kwara State

Tayo described the act by the girl giving the boy a Mouth Action as abnormal.

It is not normal for a young woman to take the manhood of the man and be swallowing. That is a very dirty thing which supposed not to be heard,” he said, adding that the institution had to apply discipline but with love.

The VC however said some stakeholders commended the university’s decision to expel the student, saying that they would have pulled their wards out of the University.

Tayo also described as mischievous a publication by an online publication that listed the institution as the third worst to attend in the country.

“I see that as a sponsored campaign to smear the institution. I know where it is coming from but we will not relent because we will do our best to offer holistic education to the children.

However, he said the institution was still in contact with the girl’s family and may take her back if she was repentant.