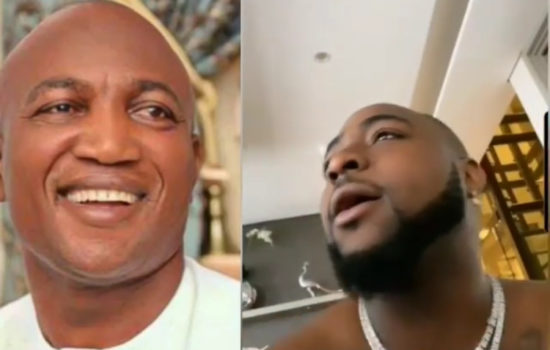 The recent order by the Supreme Court to nullify the election of Bayelsa State governor-elect, David Lyon and his running mate Biobarakuma Degi-Eremienyo has stirred reactions online from Nigerians including Davido.

Davido recorded a video where he appears to be extremely shocked over the sack. He could not comprehend how embarrassing the situation is for David Lyon.

Chief David Lyon was to be sworn-in on Friday. In preparation for the inauguration, the PDP flag was on Thursday morning removed from the Bayelsa Government House.

The five-man panel of Supreme Court headed by Justice Mary Peter-Odili ordered the Independent National Electoral Commission (INEC) to withdraw the Certificate of Return issued to the All Progressives Congress’ candidates as the winners of the November 16, 2019 governorship election in the state.

The apex court ordered INEC to issue fresh certificates to the candidates of the party with the next highest votes and required constitutional spread of votes in the results of the election, which are the Peoples Democratic Party’s candidates.

Justice Ejembi Ekwo, who read the lead judgment of the apex, made the orders after disqualifying the APC’s deputy governorship candidate, Degi-Eremienyo, as a candidate in the election.

The post Davido reacts after supreme court sack David Lyon as the governor of Bayelsa state appeared first on .

CHECK IT OUT:  UPDATE:- Man Who Allegedly Knocked Down FRSC Official Dragged To Court