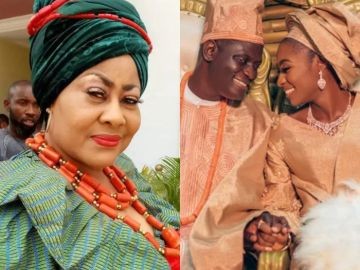 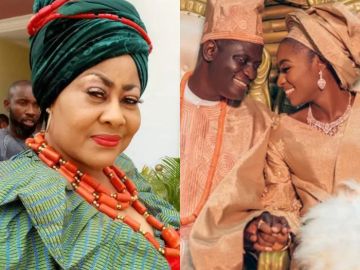 Ngozi Ezeonu’s name made the headlines today over a controversial reason after her ex-husband accused her of marrying their daughter, Ogechukwu Edwina Ezeonu off to a man, without his consent.

Ngozi’s ex-husband, Denis Ikpelue was missing at such an important celebration of his daughter.

Breaking his silence, he has revealed that Ngozi Ezeonu married off their daughter without his consent.

He noted that in Igbo land a woman cannot marry off another woman, so as long as he is concern his daughter is not married.

‘I’m the real son of the soil in Igbo land and I am knowledgeable enough to some extent concerning Igbo marriage tradition in Anambra State. In the whole of Anambra State where I belong, a woman does not and has no legitimate right whatsoever to give out a fellow woman’s hand in marriage. It is a abomination and taboo. As such, Ngozi Denis Ikpelue has no legitimate right and authority to give out Ogechukwu Edwina Ezeonu’s hand in marriage. As long as I and the entire family of Ezeonu and his kindred are concerned, Ogechukwu Edwina Ezeonu is not married.

Ogechukwu Edwina Ezeonu is yet to marry. What happened at Asaba Delta State on the 15th of February 2020 was the usual Nollywood home video film shooting.As at the time I lived with Ngozi Denis Ikpelue, I have three children; a daughter and two boys.
Concerning my relationship with Ngozi Denis Ikpelue it is no speculations; the marriage relationship packed up long time ago. Sometime in the year 2013.’ He said

‘It is no rumours about our divorce. The divorce case took place in the high court of Lagos state; in the Ikeja Judicial division. Suit No ID/429/HD/2013.

CHECK IT OUT:  ‘Naira Marley Is Not Stupid, He Actually Believes What He’s Saying’ – Ayo Shonaiya

And by the second day of January 2015, a legal dissolution of the marriage was given by the court and Ngozi Denis Ikpelue ceased to be married to me Mr Edwin Ezeonu.
She has been deceiving the whole world by saying that she is still married to me.’ he added

Meanwhile, Ngozi Ezeonu is yet to comment on the development.

The post Ngozi Ezeonu’s Ex-husband Accuses Her Of Marrying Off Their Daughter Without His Consent appeared first on .