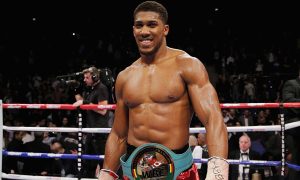 Nigerian-British boxer Anthony Joshua confirmed that he will defend his world heavyweight titles against Kubrat Pulev in London on June 20.

The unified heavyweight titles posted a picture of himself wearing his belts on his Twitter feed with the words “June 20th”.here is Joshua’s tweet

Joshua regained the WBA, IBF and WBO titles with a unanimous points win over Andy Ruiz Jr in Saudi Arabia in December.

That victory saw the Briton avenge the first defeat of his professional career, in New York last June. Joshua is set to face Bulgaria’s Pulev at the new Tottenham Hotspur Stadium in north London.

Pulev, who is the mandatory challenger for Joshua’s IBF title, pulled out of a scheduled meeting with the Briton in 2017 due to injury.

Naija News recalls that Fury had wanted to fight Anthony Joshua next in a world title unification bout but Wilder had a rematch clause.

CHECK IT OUT:  Police In Ogun Arrest Man Who Killed Neighbour With Machete