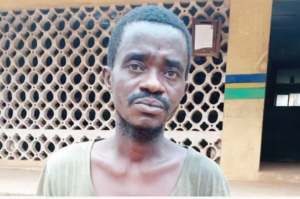 A man who reportedly killed a woman in his neighbourhood has been arrested by the Ogun State Police Command.

The incident which was confirmed to newsmen by the Police Public Relations Officer in Ogun State, Abimbola Oyeyemi, noted that a man identified as Ejike Okata has been arrested for allegedly killing a woman named Adeyiba Oladipo, 50.

Naija News learned that the Twenty-Seven-year-old Okata, an indigene of Onueke, Eza South Local Government Area of Ebonyi State, allegedly murdered his neighbour who resides in Ayegbami, Ijebu-Ode but was arrested by the policemen two days after the horrible act.

Giving an update on the incident on Sunday, PPRO Abimbola hinted that Okata was arrested at the Mobalufon junction motor park while attempting to run away to his village in Ebonyi State.

According to Abimbola, Okata used a machete on his neighbour after an argument which erupts between them on Friday, which results in her death.

He further revealed that the command had received a distressed call by the deceased’s brother who reported the incident to the Obalende Police Station, Ijebu-Ode.

Reporting the case, the deceased brother gave to the police station that Okata cuts his sister with a machete over a minor argument that happened between them on the early hour of Friday.

Abimbola in his reaction said, “Upon the report, the DPO, Obalende Division, CSP Omonijo Sunday, mobilised his detectives to the scene, where the corpse of the victim was recovered and taken to the Ijebu-Ode General Hospital mortuary for autopsy.”

“A serious manhunt was launched for the fleeing suspect. The efforts of the detectives yielded a positive result on Sunday, March 1, 2020, when the suspect was about to board an Ebonyi State-bound vehicle, but he was apprehended by policemen, who had already laid an ambush for him due to intelligence information that they already had about him.”

“On interrogation, the suspect, who hails from Onueke in the Eza South Local Government Area of Ebonyi State, confessed to dealing machete blows on the deceased, because she accused him of stealing a phone, which infuriated him.

“He confessed further that he cut off the woman’s two hands because she wanted to struggle with him and collect the machete.”

However, reports had it that the State Commissioner of Police, Kenneth Ebrimson, had ordered the immediate transfer of the suspect to the homicide section of the State Criminal Investigation and Intelligence Department for further investigation and prosecution.

CHECK IT OUT:  Photos: See the fine toilets, AC, and VIP seats inside the Lagos-Ibadan speed train

In another news, It could be recalled that some Officers of the Special Anti-Robbery Squad popularly known as SARS has caused chaos in Ogun State a few days ago after a gunshot targetted at an Internet fraudster hits two pepper sellers, Naija News report.