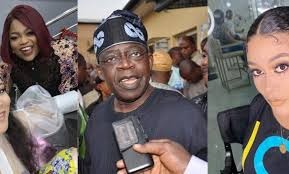 Popular Nollywood actress, Adunni Ade has traded words with her followers under her post about Funke Akindele’s arrest. In one of the replies she gave, the mother of two feels Asiwaju Bola Ahmed Tinubu should be arrested too.

The light skinned Nollywood actress had initially made a post about Funke Akindele’s arrest and in it she supported the actress with reasons.

Here is what she posted:

Meanwhile a fan commented with

something opposite to the points she highlighted in support of Funke Akindele.

Meanwhile, Adunni Ade’s response to the user sparked reactions after she felt that Funke Akindele was arrested but she doesn’t see them arresting the National leader of the ruling All Progressives Congress (APC) Bola Ahmed Tinubu.

See what the user commented below and how Adunni Ade replied.

CHECK IT OUT:  Tonto Dikeh shares picture of herself wearing a unique and protective facemask