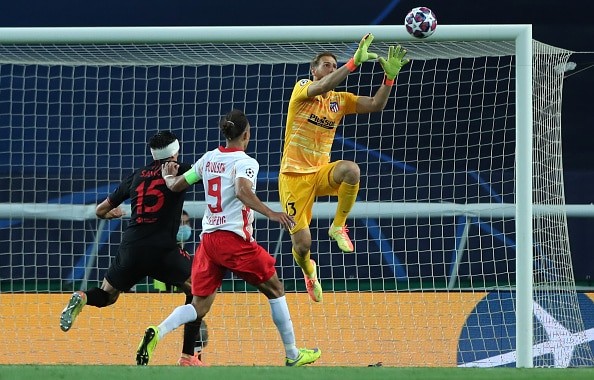 Red Bull Leipzig are through to the semifinals of the UEFA Champions League after defeating Atletico Madrid 2-1 at the Estadio Jose Alvalade on Thursday night.

All the goalscoring action came after the break: Dani Olmo handed Leipzig a 50th-minute lead but Joao Felix made it 1-1 20 minutes later before Tyler Adams netted the winner with a few minutes of the game left.

Leipzig dictated the pace of the game early on but it was Atletico who had the best chance of the half when Carrasco forced goalkeeper Gulacsi into a good save at his near post.

But for all of Leipzig’s good play, the German side’s only shot on target came in added time when centre-back Upamecano headed on from a corner, which Oblak claimed without any problems.

Goalless it was at the break but it was not to stay that way for long after the restart when RB Leipzig stunned Atletico with a sucker punch.

A brilliant move from Leipzig saw the Bundesliga outfit switch play from left to right before sending a cross in for an unmarked Daniel Olmo who dutifully headed the ball across goal, past Oblak and into the far bottom corner.

That goal forced Diego Simeone into making the first change of the game, the Argentine sending in Joao Felix in place of Herrera.

It proved to be an inspirational intervention as the Portuguese wonder kid, barely ten minutes later, won and converted a spot kick to drag the Spanish side back on levelled terms.

But Leipzig edged back in front when Adams’ low shot took a big deflection off Savic past Oblak and into the net.

CHECK IT OUT:  “Obasanjo Travelled More Than Buhari” – Oshiomhole Reveals