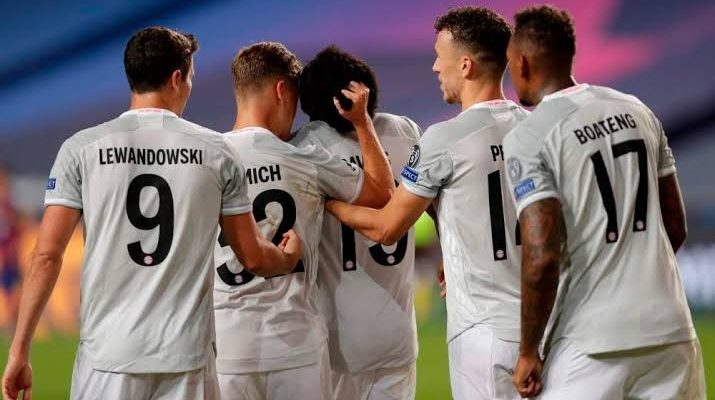 The Bundesliga champions humiliated a Messi-led Barcelona 8-2 on Friday night to dump the Spaniards out of the Champions League, to the delight of the former Super Eagles manager

Former Borussia Dortmund midfielder Sunday Oliseh has placed aside old rivalry to laud Bayern Munich youngster Alphonso Davies and the club for the manner of defeat handed to Messi and co.

The Bavarians took Barca to the cleaners at the Estadio da Luz, scoring four goals in each half in a show of efficient attacking football that sunk the La Liga giants into their worst ever defeat in Europe.

A brace each from Muller and Coutinho, coupled with strikes from Gnabry, Perisic, Kimmich, and Lewandowski, propelled Die Rotten to the semifinals of the Champions League where they will face the winner of the Manchester City vs. Lyon tie.

But none of those goal scorers impressed Oliseh as much as fullback Davies who was full of energy and composure all night.

The Canadian international’s highlight of the encounter was when he provided the assist to Kimmich’s strike – Bayern’s fifth – after turning opposite fullback Semedo inside out.

Oliseh, full of praise for the 19-year-old, reckons that Hans Flick’s side was far superior to their pitiful Spanish opponents.

“He has it all: Pace, skills, vision, endurance, intelligence, and an insatiable will to win.

“Bayern did not accidentally crush Barca, they were all-round better in my view.”

Extremely pleased,the world has finally discovered the extraordinary talent of Alphonso Davies of Bayern Munich. He has it all: Pace,skills,vision,endurance,intelligence and an insattiable will to win. Bayern did not accidentally crush Barca,they were all round better in my view. pic.twitter.com/a1QJwNL2lg

CHECK IT OUT:  [Music] CapitalTKO – Adura