Moses Simon On Target For Nantes - NaijaCover.Com
Skip to content 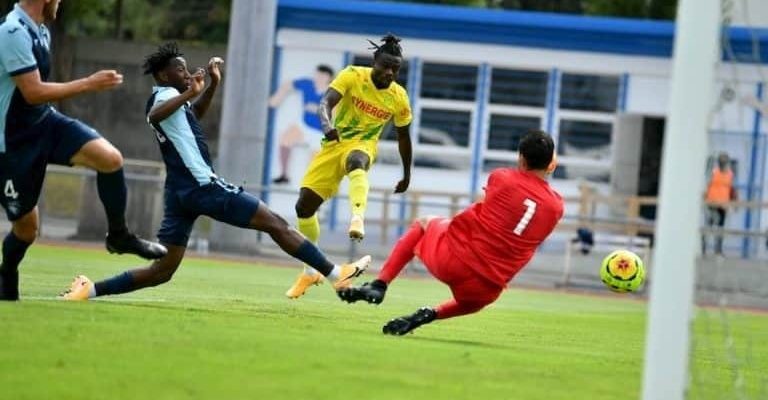 The Nigerian international picked up from where he left last season by firing Nantes ahead in the 8th minute following a perfect cross from Kader Bamba.

Simon had an impressive debut campaign with Les Canaries, winning the club’s player of the season. Having joined on loan initially, Nantes signed him permanently on a four-year deal this summer.

The former Gent winger scored nine times in 33 appearances for Les Canaries last season, and his strike against Le Havre shows he’s not ready to stop.

After his opener, Simon had the chance to extend Nantes lead two minutes later, but his effort by Le Havre goalkeeper.

Christian Gourcuff’s men continued to dominate possession, but they could not convert their chances. They would later rue the missed opportunities as Le Havre drew level from the penalty spot on the stroke of half-time.

However, Nantes came out firing in the second half with goals from Coulibaly (48th) and a Bridge Ndilu stoppage-time strike sealing the win for the Ligue 1 side.

CHECK IT OUT:  This Seductive Dance By Beautiful Female Soldiers Will Make Your Thing Stand (Watch Video)