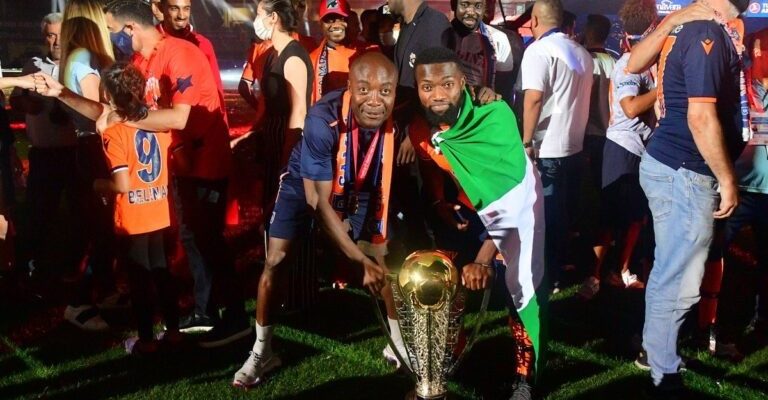 Istanbul Basaksehir won their first-ever Turkish Super Lig title in July, and the club’s Nigerian star confesses that they had a little help from the ravaging pandemic

Nigeria youth international Okechukwu Azubuike has expressed his delight at making history with Turkish league champions Istanbul Basaksehir. Still, he admits the club’s triumph may not have been possible without the coronavirus-induced break.

Established in 1990, Basaksehir had finished as runners-up on two separate occasions in the past and had never won the league title.

And, for long periods during the campaign, it didn’t appear that this would be their year with Trabzonspor – the side with the league’s most prolific attack – setting the pace and leading the park.

But the outbreak of the coronavirus pandemic forced most league games across Europe, including the Turkish Super Lig, to be suspended back in March.

And when the league restarted in June, Trabzonspor faltered winning just three of their remaining matches.

The road was thus paved clear for Basaksehir to ride to glory after losing just two of their last eight games.

Okechukwu, who joined Basaksehir on loan from Egypt’s Pyramids FC, is grateful that the emergency break came at the perfect time.

Trabzonspor are a very good side,” Okechukwu told ESPN.

“They’ve got talents; all the players, and they had the highest points in the league, so they were a stiff competition.

CHECK IT OUT:  ITS OVER!! Former Liverpool & Chelsea Striker Fernando Torres Retires

Despite battling with injuries, Azubuike, 23, made 31 appearances across all competitions for Basaksehir, and his efforts have been rewarded with the champions securing his services permanently from Pyramids.