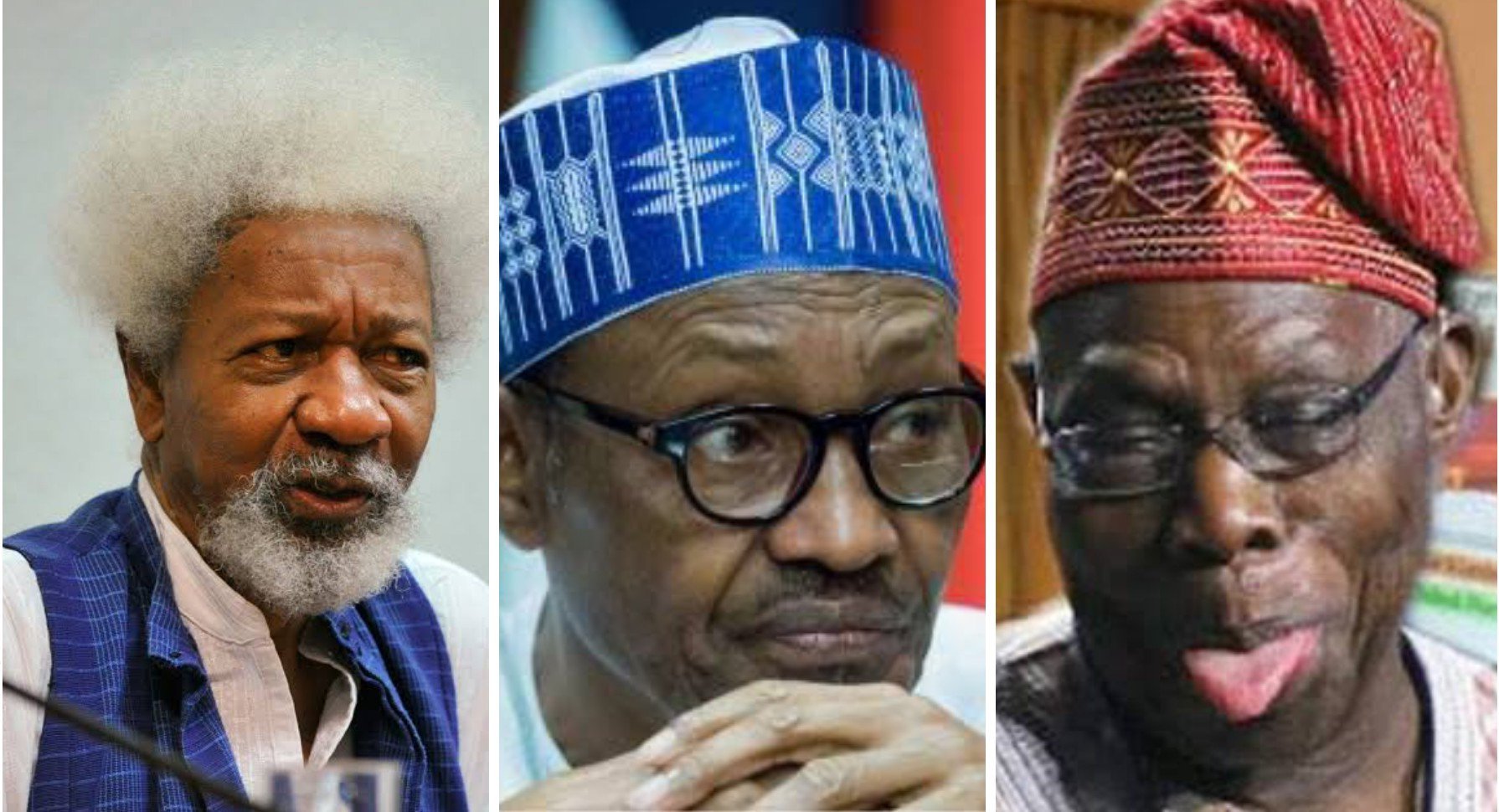 Nobel Laureate, Wole Soyinka has backed former President Olusegun Obasanjo over his comment of Nigeria being divided under President Buhari.

In a statement titled “Between ‘Dividers-in-chief’ and Dividers-in-law” and released on Tuesday September 15, Soyinka who noted that he has never been a fan of ex-President Olusegun Obasanjo, averred that Nigerians no longer believe that Buhari’s administration understands the minimal requirements for positioning the country as “a modern, functional space of productive occupancy.”

“I am notoriously no fan of Olusegun Obasanjo, General, twice former president and co-architect with other past leaders of the crumbling edifice that is still generously called Nigeria. I have no reasons to change my stance on his record. Nonetheless, I embrace the responsibility of calling attention to any accurate reading of this nation from whatever source, as a contraption teetering on the very edge of total collapse. We are close to extinction as a viable comity of peoples, supposedly bound together under an equitable set of protocols of co-habitation, capable of producing its own means of existence, and devoid of a culture of sectarian privilege and will to dominate.

“The nation is divided as never before, and this ripping division has taken place under the policies and conduct of none other than President Buhari – does that claim belong in the realms of speculation?

“Does anyone deny that it was this president who went to sleep while communities were consistently ravaged by cattle marauders, were raped and displaced in their thousands and turned into beggars all over the landscape? Was it a different president who, on being finally persuaded to visit a scene of carnage, had nothing more authoritative to offer than to advice the traumatised victims to learn to live peacefully with their violators?

“And what happened to the Police Chief who had defied orders from his Commander-in-Chief to relocate fully to the trouble spot – he came, saw, and bolted, leaving the ‘natives’ to their own devices. Any disciplinary action taken against ‘countryman’? Was it a spokesman for some ghost president who chortled in those early, yet controllable stages of now systematised mayhem, gleefully dismissed the mass burial of victims in Benue State as a “staged show” for international entertainment?

“Did the other half of the presidential megaphone system not follow up – or was it, precede? – with the wisdom that they, the brutalized citizenry, should learn to bow under the yoke and negotiate, since “only the living” can enjoy the dividends of legal rights?”

The post Soyinka takes sides with Obasanjo, says Nigeria has never been this divided appeared first on .

CHECK IT OUT:  Heartbreak for Simy as Inter edge closer to Serie A title