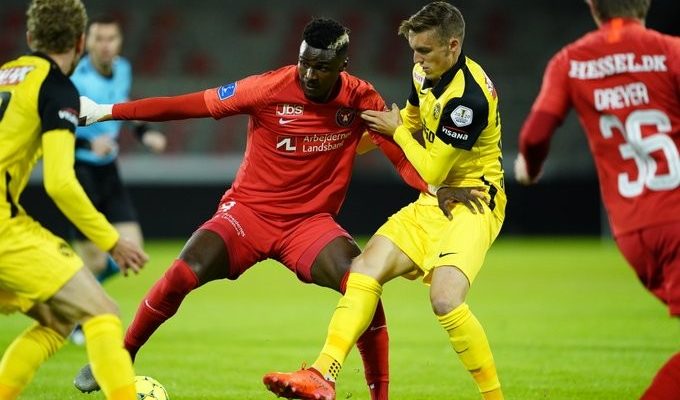 The 22-year-old, who has been tipped for a Super Eagles call-up, was solid in the middle of the park for Brian Priske’s side.

Midtylland took the lead six minutes after the break courtesy of a Jordan Lefort own goal. Anders Dreyer then added a second in the 62nd minute before Awer Mabil’s strike six minutes from time secured a comfortable win for the Wolves.

Nigeria’s Leke James was in action for 98 minutes before he was taken off for Mathis Bolly. Molde are now just two games away from the Champions League group stages, and could achieve that feat if they beat Ferencvaros in the playoffs.

Away from the Champions League, Alex Iwobi was missing again as Everton kicked off their Carabao Cup camapaign with a 3-0 win over Salford.

Iwobi, who has been transfer listed by Everton, also missed the Toffees win over Spurs in the opening weekend of the new Premier League season.

CHECK IT OUT:  Osinbajo Jets Out To UK For Son’s Graduation

Goals from Michael Keane, Gylfi Sigurdsson and a Moise Kean penalty secured Everton’s passage to the next round.

Finally, Semi Ajayi was an unused substitute as West Brom also sealed their place in the next round of the Carabao Cup following a 3-0 win over Harrogate. Rekeem Harper, Hal Robson-Kanu and Callum Robinson were the scorers for the Baggies on Wednesday night.